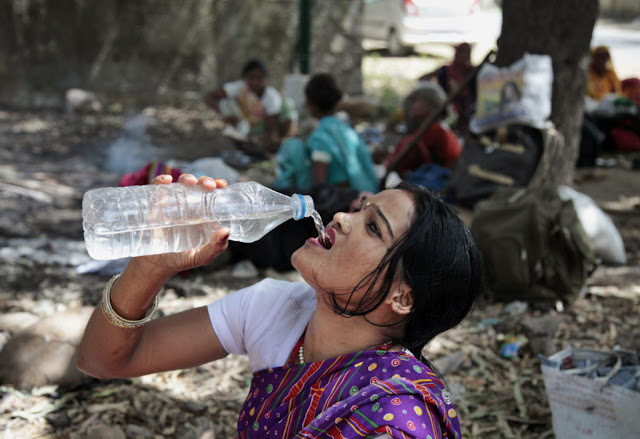 Photo yournewswire.com
After strong winds, lightning and thunderstorms swept through northern and eastern India, killing at least 54 people earlier this week the incredible heat is not going away anytime soon.
At a time when many of Indian's fall prey to dizziness and dehydration merely after spending a couple of hours in the scorching sun, birds falling out of the sky due to dehydration and heatstroke and roads and cars melting.
Andhra Pradesh's State Disaster Management Authority has forecast extreme heatwave conditions in parts of the state with temperatures expected to touch 48 degrees Celsius, (118 deg F), the hottest in 40 years, in the next 24 hours, PTI reported on Wednesday.
The State Disaster Management Authority said many parts of Krishna district are expected to record 46 degrees Celsius on May 31, while the temperature may range from 43 to 44 degrees Celsius in East and West Godavari, Guntur, SPS Nellore and Chittoor districts.
The disaster management authority predicted that Srikakulam and Vizianagaram may record 38 to 39 degrees Celsius, while Visakhapatnam, Kadapa, Anantapuramu and Kurnool districts may record 40 to 41 degrees Celsius.
The southwest monsoon that has hit the Kerala coast is expected to advance into Andhra Pradesh around June 3, SDMA said.
On Wednesday, the southwest monsoon advanced to a few parts of the central Arabian Sea, and the remaining areas in Kerala, where it arrived three days early on Tuesday.
It also advanced to most parts of coastal Karnataka and interior regions in the states southern part, the meteorological department said.
Heavy rains lashed Mangaluru on Tuesday, inundating several low-lying areas.
The India Meteorological Department on Wednesday said the country will receive between 96% and 104% of the average rainfall.