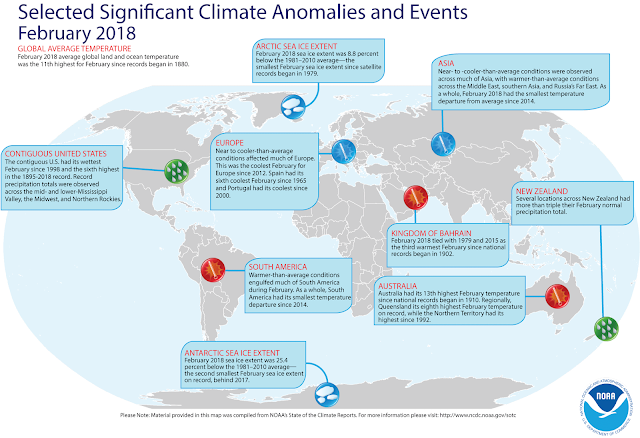 An annotated map of the globe showing other notable climate events that occurred during February and Winter 2018. (NOAA NCEI) Click on image to enlarge.

Today is the first day of Spring in the northern hemisphere but you wouldn't think so if you live in Europe or the Northeast of the US with Siberian cold and heavy snow respectively so late in the season.
NOAA's monthly world weather report came out today for February and guess what?...
Our planet recorded its coolest February since 2014!

Below are highlights of NOAA's latest report...

Though La Nina is starting to wane, the ocean-cooling phenomenon continues to lower global temperatures.

February 2018 ended up being Earth’s coolest February in four years. The December-to-February seasonal period also was the coldest it has been since 2014, according to scientists from NOAA’s National Centers for Environmental Information.

Let’s take a closer look at NOAA’s monthly analysis, which shows how Earth fared for the month, the three-month season and the year to date:

Seasonal | December 2017 through February 2018
The end of February marked the end of the meteorological winter for the Northern Hemisphere and summer for the Southern Hemisphere. The average seasonal temperature for the globe was 1.31 degrees F above the 20th-century average of 53.8 degrees, and it was the fifth warmest for December-February in the record.

Year to date | January through February 2018
The year-to-date average global temperature was 1.22 degrees F above the 20th-century average of 53.8 degrees.
This was the eighth-highest temperature for the year to date period on record and the coolest such period since 2014.

Other notable climate events and facts

The average Arctic sea ice coverage in February was 8.8 percent below the 1981-2010 average, the smallest February extent since records began in 1979.

The globally averaged sea-surface temperature ranked seventh warmest for February, and sixth warmest for the season and year to date.