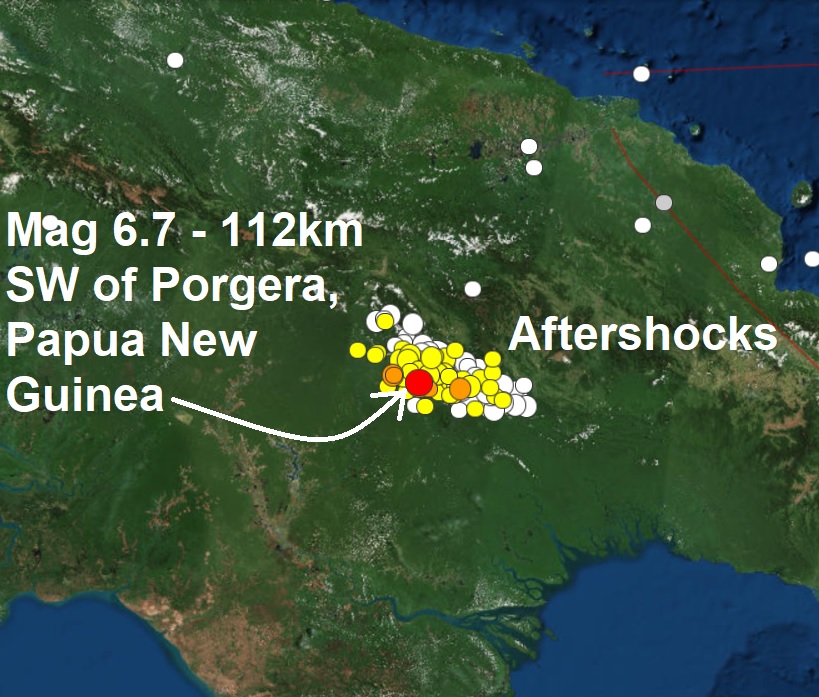 USGS
Another massive aftershock rocks Papua New Guinea this afternoon, the powerful magnitude 6.7 quake is the 4th mag 6 + quake since the initial mag 7.5 struck last weekend, in all nearly 150 aftershocks have rocked the area since.
Almost 100 people have died with thousands homeless and without food and clean water.
The recovery effort has been slow as aid workers grapple with blocked roads and power outages to reach cut-off villages after the 7.5-magnitude quake struck on February 26 in the Pacific nation's mountainous interior.
Terrified locals in the Southern Highlands, Western, Enga and Hela provinces have also had to deal with more than 150 strong aftershocks, including four 6.+ magnitude tremors.
"Around 143,000 people are affected and 17,000 people have been generally displaced because their homes are either fully or partially damaged and not in a condition to live in."
Today's major quake is the 25th major quake of 2018 and the 2nd one of March.
Of the 25 major quakes reported this year, 24 of them have occurred during coronal activity on the sun.
At the same period last year, only 14 major quakes had been recorded worldwide in what was to become the lowest year this century for major quakes.