Global Warming, Cooling, Climate Change? We have it all! Six month sunless North Pole warmer than many parts of the Northern Hemisphere 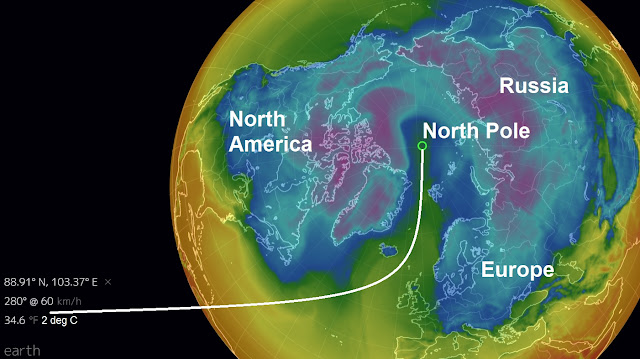 Earthwindmap, click on image to enlarge
Wheather or not you are sitting in the global warming camp or the global cooling camp there is something for everyone around the Northern Hemisphere in the coming days.
As Europe is witnessing it's coldest spell in years, Asia plunged into Arctic weather and Frigid weather returning to North America after once-in-100-year warmth along the Northeast of Canada and the US, the North Pole will be warmer than most of the above mentioned in the coming days despite the fact the Arctic circle has seen no Sun for the best part of six months.
The Earthwindmap is showing temperatures at the North Pole at around +2 deg C or + 35 deg F in the coming days while massive sways of the Northern Hemisphere are plunged into frigid cold.
According to AccuWeather.com, record highs for February established in the 1800s and 1900s were shattered along the east coast of North America recently. 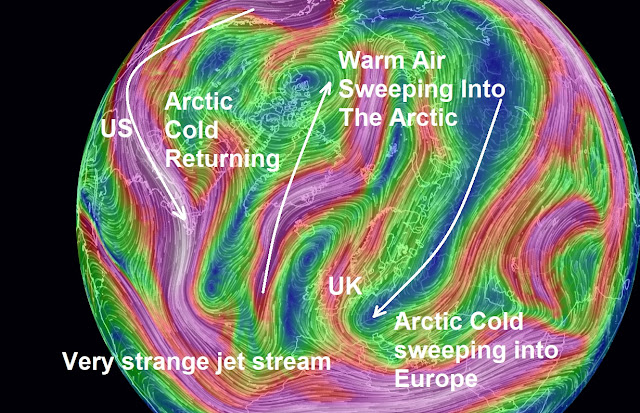 Click to enlarge
Temperatures climbed into the 80s F as far north as Teterboro Airport, New Jersey, and the middle 70s as far north as Syracuse, New York, and Sanford, Maine and mid 60's into Canada.
A dominant high-pressure system is developing over northwestern Europe and is set to plunge the area into Arctic type conditions for the next ten days at least.
Western Europe and the UK will suffer their coldest period of the winter with many countries having to endure their coldest spell in years.
According to the Met Office, cold air will spread from Syberia carried from the jet stream towards the UK and western Europe.
Normally the jet stream this time of the year meanders across the Atlantic bringing cloudy, rain and mild weather, however later in the week the jet stream will take on an unusual path coming in from the northeast bringing in Arctic temperatures.