Near miss! The Big Wobble prediction of a major quake or eruption in the vicinity of Kanlaon volcano Philippines see's a mag 5.1 and 2 mag 4.7's 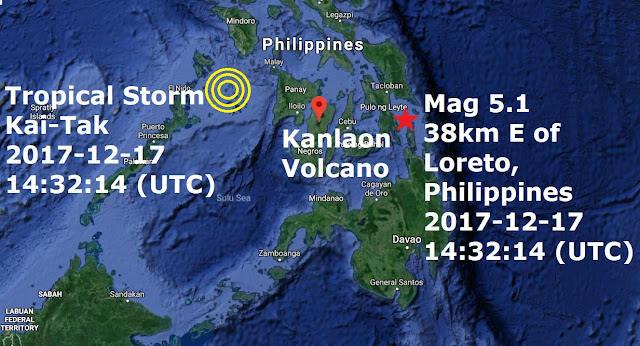 Google Maps
It's was a disaster waiting to happen, active Volcano Kanlaon in the Philippines which had shaken with 2,234 volcanic earthquakes on Thursday and Friday, along with a coronal hole on our Sun, spewing solar wind towards Earth and tropical storm Kai-Tak battering the volcano's vicinity with severe winds and torrential rain over the weekend had led me to forecast a major quake or volcanic eruption in the area on Saturday or Sunday.
I was almost on the money, but not quite, as the tropical storm, Kai-Tak raged at 14:32 (UTC) a mag 5.1 quake struck just west of volcano Kanlaon, earlier two mag 4.7's also hit the area as the volcano continued to show activity, you can see the prediction here.
It was a sad weekend in the Philippines, at least 30 people have died as a result of landslides caused by Tropical Storm Kai-Tak, the state-run Philippine News Agency (PNA) reported Sunday.
Another 24 people have been reported missing, the news agency said.
The deaths occurred in the Biliran Province, PNA reported.
The storm has caused massive flooding that has destroyed bridges, leaving several towns isolated.
More than 35,000 families or almost 160,000 people in Eastern Visayas and Caraga region have been affected by Tropical Storm Kai-Tak or Urduja to the locals, the National Disaster Risk Reduction and Management Council (NDRRMC) reported Saturday.
The NDRRMC's situational report released around 8 a.m., said the affected population is composed of 35,021 families or 158,166 people in 322 barangays across the two regions.
Of this number, 8,831 families or 38,846 people are staying in evacuation centres.
The storm has also cut power supplies to thousands of people as it heads west towards Palawan.
Many areas were flooded, damaging crops and infrastructure.
Kai-Tak has weakened to a tropical depression after barrelling through the eastern region of Visayas on Saturday, hitting islands and coastal towns such as Tacloban City where super typhoon Haiyan claimed 8,000 lives in 2013.