A Mount Agung explosive eruption could conveniently drop global temperatures by 0.4–0.7 °C (0.7–1.3 °F) causing a year without summer across the planet 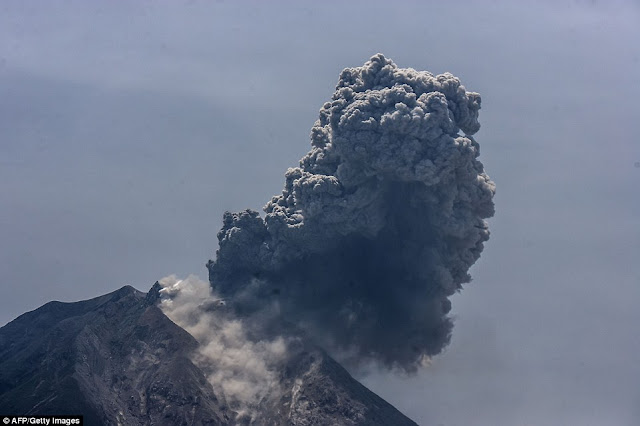 Photo AFP/Getty Images
Bali's Ngurah Rai airport will remain closed until at least Wednesday morning local time.
"The Volcanic Ash Advisory shows that the plane routes have been covered by volcanic ash, this is dangerous for the flights," Indonesian AirNav official Wisnu Darjono said.
Indonesia has warned the first major eruption of Mt Agung on the tourist island of Bali is imminent, with authorities closing the airport and ordering 100,000 residents living near the volcano to evacuate the area immediately.
It could be hours away or it could be weeks away, but the Bali governor claims it is imminent and when it blows depending on the size of the eruption, Mount Agung could cause a global cooling, freezing people to death, global crop failures and food shortages across the planet.
Global temperatures could decrease by 0.4–0.7 °C (0.7–1.3 °F).
This would result in major food shortages across the Northern Hemisphere.
The year 1816 is known as the Year Without a Summer also the Poverty Year, the Summer that Never Was, Year There Was No Summer after Mount Tambora erupted in the Dutch East-Indies see Wikipedia link below.
An event like this would be a perfect convenient answer to the scientists claiming our planet is too warm, just imagine a decrease of, 0.4–0.7 °C (0.7–1.3 °F) in global temperatures would bring our planet right back into balance regarding global warming.
Warnings that a volcano on the Indonesian tourist island of Bali will erupt have sparked an exodus of nearly 100,000 people that is likely to continue to swell, the country's disaster agency said Tuesday. Authorities have ordered the evacuation of villagers living within a high danger zone that in places extends 12 kilometres (7.5 miles) from Mount Agung's crater.
But people further away are also leaving, said National Disaster Mitigation Agency spokesman Sutopo Purwo Nugroho.
The region is being rattled daily by hundreds of tremors from the mountain, which volcanologists say indicates a high chance of an eruption.
Mount Agung last erupted in 1963, killing about 1,100 people.
Evacuees are taking shelter at more than 370 sites across the island that include temporary camps, sport centres, village halls and the houses of friends and relatives.
Villager Wayan Merta said he was among the first to evacuate last week because of his village, Selat, is just 6 kilometres (4 miles) from the summit.
"We have already sold our cattle because we thought it was better than leaving them there for nothing," he said.
"My feeling is the mountain will erupt," he said.
"But no one knows, we just pray."
Sutopo said it was "natural" that people outside the immediate danger zone are leaving.
More than 500,000 people evacuated when Mount Merapi in central Java erupted in 2010, more than double the population in the exclusion zone around that volcano, he said.
In 1963, Agung hurled ash as high as 20 kilometres (12 miles) and remained active about a year. Lava travelled 7.5 kilometres (4.7 miles) and ash reached Jakarta, about 1,000 kilometres (620 miles) away.
"This is the heaviest test in my life and hopefully it will end soon," said Ketut Suliasih, a Selat villager.
She said evacuees are being treated well by the government and community, but like others, she is fearful about the future.
"No eruption. That is my prayer. Otherwise, our farms would not be able to be planted again." President Joko "Jokowi" Widodo visited a sports centre serving as temporary accommodation in a district south of the volcano on Tuesday.
In a televised news conference, he said "the highest priority is the safety of our people" and urged those around Mount Agung to follow the instructions of authorities.
In the Central Java town of Yogyakarta, about 500 people gathered at a Hindu temple to pray for the safety of people near the volcano.
But thousands haven't left despite authorities raising the alert to its highest level, and forcible evictions may be enforced, a spokesman for the country's National Disaster Management Agency (BNPB) said.
"There are personnel doing the sweeping, if they [residents] need to be forcibly evacuated," Sutopo Purwo Nugroho said.
The airport was originally closed for 24 hours from Monday morning, disrupting 445 flights and stranding about 59,000 passengers, after Mount Agung sent volcanic ash high into the sky.
Officials said cancellations could be extended.
"Plumes of smoke are occasionally accompanied by explosive eruptions and the sound of weak blasts that can be heard up to 12km from the peak," the Disaster Mitigation Agency said in a statement after raising the alert from three to its highest level of four.
"The potential for a larger eruption is imminent," it said, referring to a visible glow of magma at Mount Agung's peak overnight and warning residents to evacuate a danger zone at a radius of 8-10km.
Video footage shared by the agency showed volcanic mudflows (lahar) on the mountainside.
Lahar carrying mud and large boulders can destroy houses, bridges and roads in its path.
Bali airport, about 60km from the volcano, will be closed for 24 hours, its operator said.
Ten alternative airports have been prepared for airlines to divert inbound flights, including in neighbouring provinces.
Virgin Australia said it was cancelling flights on Tuesday, while Jetstar was offering to exchange Bali bound tickets for other destinations.

The Year Without Summer
Home Page
at November 29, 2017