Thousands of penguin chicks die because of "too much ice due to climate change!" forcing penguin parents to travel farther to feed their young 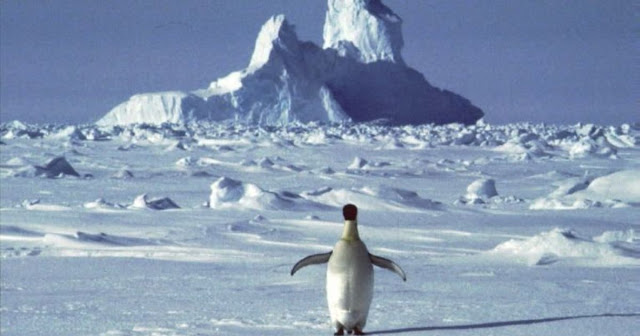 Photo 13wmaz.com
We are used to the hearing the mantra, " climate change is causing the polar ice caps to shrink!"
Well, according to the experts you will be shocked to learn that is not the case, sea ice extent in the polar regions varies each year, but climate change has made the fluctuation more extreme. (this means more ice in the Antarctic last summer)
So much more ice, that an entire flock of chicks from an Adelie penguin colony in the eastern Antarctic was wiped out by starvation last summer in what scientists say is only the second such incident in over 40 years
Researchers said Sunday the mass die-off occurred because unusually large amounts of sea ice forced penguin parents to travel farther in search of food for their young.
By the time they returned, only two out of thousands of chicks had survived.

"Not only did the chick starve but the partner (who stayed behind) also had to endure a long fast," said Yan Ropert-Coudert, a marine ecologist with the French science agency CNRS.

Ropert-Coudert, who leads the study of seabirds at the Dumont D'Urville Antarctic research station, said the Adelie colony there numbers about 18,000 pairs who have been monitored since the 1960s.
A similar breeding loss was observed for the first time during a 2013-2014 research expedition.

"It is unusual because of the size of the population concerned," he said in an email to The Associated Press. "Zero breeding success years have been noted before elsewhere, but never for colonies of this size."

Sea ice extent in the polar regions varies each year, but climate change has made the fluctuation more extreme.

The environmental group WWF, which supported the research, urged governments meeting in Hobart, Australia, this week to approve a new marine protection area off East Antarctica.
Rod Downie, head of polar programs for the group's British branch, said the impact of losing thousands of chicks was dramatic for an otherwise hardy species such as Adelie penguins.