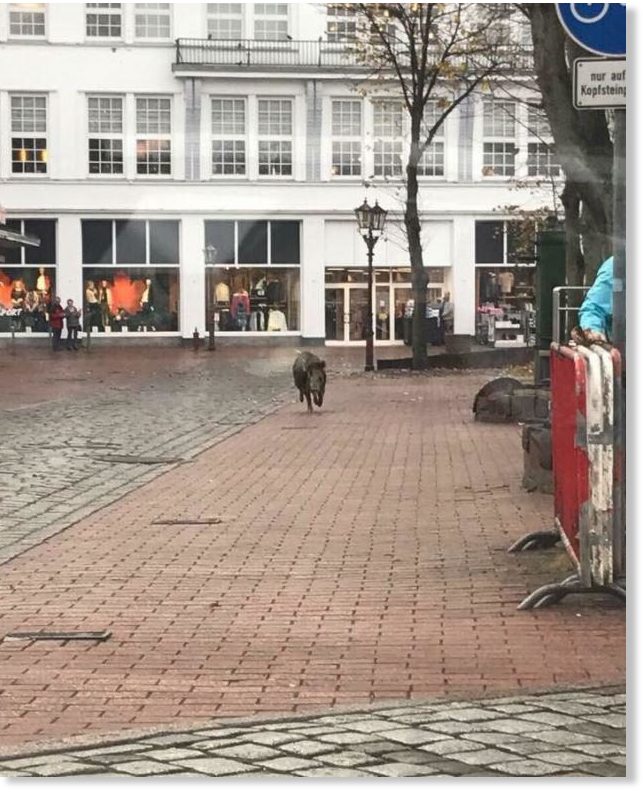 Photo sott.net
Four people were injured after squealing boars descended on the small city of Heide in the northern German state of Schleswig-Holstein on Friday morning.
Two fully-grown, "aggressive" wild boars - a male and a female - stormed into the city center shortly after 9 a.m. according to local police statements.
The male then entered the building of a local bank and began attacking people inside before a local hunter was able to shoot and kill the animal.
The second boar managed to escape amid the commotion.
Before the shot was fired, emergency services had used ladders to evacuate people from the building's upper-story windows.
Earlier in the day, the male boar had injured a woman after entering an optician's.
Christina Norden, a local journalist, shared on Twitter a video of the boar roaming the shop.
News agency dpa reported that the boar had injured the bank's branch manager's leg.
Local broadcaster NDR said one man had lost part of his finger in the attack.
The town's mayor, Ulf Stecher, had witnessed the incident and told dpa that police had allowed the hunter to shoot the boar because their own weapons were too powerful.
The police said local hunters were unable to find the sow, which was now likely to be roaming free on the outskirts of Heide.
They've advised the public not to approach her.
Friday's incident is the second high-profile wild boar attack in Germany this year.
In January, an errant herd of boars injured three people near Berlin's Tegel airport.
Berlin is particularly notorious for wild boar attacks in the winter months when around 4,000 to 6,000 Central European boars enter the urban areas of the city.
Speaking on Friday in Heide, Stecher told dpa it had been "a very unusual situation."
"I would have never thought that we would ever find ourselves in such a dangerous situation."