"This is a natural disaster, we cannot avoid, we can't stop it exploding" Bali's Governor warns of imminent eruption on Gunung Agung, volcano 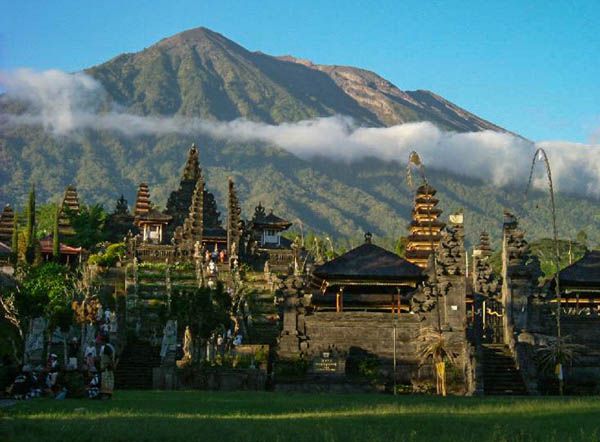 Photo baliglory.com
Bali's Governor has urged people to remain calm amid fears of a volcanic eruption on the holiday island.
Seismic activity at the Mount Agung, or Gunung Agung, volcano significantly increased on Monday, leading authorities to issue a level 3, or high, alert and evacuate areas within 7.5 kilometres.
"We see that the earthquake frequency is very high, this is worrying when it comes to eruption," said Kasbani, the head of the Centre for Volcanology and Geological Hazard Mitigation.
"The areas should be closed, no hiking because the seismic activity will trigger dangerous gas." Mount Agung is a popular hiking spot for foreign tourists.
Kasbani said no volcanic ash had been detected but smoke was rising from the crater.
The alert level would be raised to 4, or dangerous, if it became clear an eruption was imminent.
The volcano last erupted in 1963, emitting ash 10 kilometres high and killing more than a thousand people.
Bali's Governor tried to reassure worried locals that all measures were in place to cope with a possible eruption.
"This is a natural disaster, we cannot avoid it, we can't stop it exploding but we can reduce the number of victims and loses," Made Mangku Pastika said.
"If you have to evacuate, you evacuate."
He said authorities had prepared locations for residents to store motorbikes, cars and even livestock to reduce losses.
"We are prepared, I believe we can handle everything," the Governor said.
There has been no impact on flights in and out of Bali. The Governor said tourists should follow advice from officials and hotel staff.