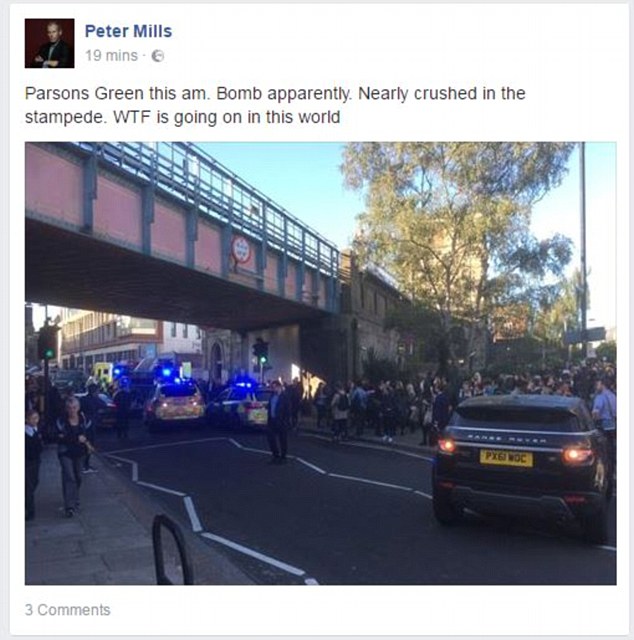 Photo Peter Mills
Police are investigating an incident on a London Underground train amid reports of an explosion.
The blast left a number of passengers with facial burns, it has been reported.
Scotland Yard said it was aware of the incident at Parsons Green station and officers were in attendance.
The authorities said there was no service between Earls Court and Wimbledon on the District Line. Bomb squads, police and fire crews were called to the scene after the explosion which involved a white bucket inside a Lidl carrier bag.
A metro.co.uk reporter at the scene described seeing people with facial burns, adding that they were 'really badly burned' and 'their hair was coming off'.
They said that the rear of the train filled with smoke and people left the train, some panicking, at Parsons Green.
One woman described how she had hurt her legs and had seen a large flame fill the carriage and another woman had ash in her hair.

An 'explosion' on board a packed Tube train sparked panic during the morning rush hour.
Commuters fled in terror after hearing an explosion and feeling a 'heat wave' move through a carriage on board a District line train.
Witnesses described being 'horrified and shaken' after the incident at Parsons Green station at about 8.25am.
One wrote on Twitter: "Never been so scared in my life," while another said there was an "extremely heavy armed police presence".
All trains are suspended between Earl's Court and Wimbledon as emergency services deal with the incident.
A photo allegedly from the scene shows what looks like a bucket on the train which appears to have flames coming from it.
Daniel Holden, who was on the train at the time, said: "The train had just opened doors at Parsons Green.
"Then there was a loud bang, heatwave, and fire burst.
Everybody scrambled forwards and off.
"The stairs at the station delayed people getting out.
All emergency services are here now."
Another passenger told the Standard: "I luckily was in the front carriage.
"As we stopped at Parsons Green we saw all the people running in panic. I've been told that a bag exploded at the back of the carriage." She added: "Some people got really hurt."
"The response from the fire brigade, ambulance and police is prompt and quick.
Parsons Green has been closed and evacuated."
The ambulance service, London Fire Brigade, and the Met Police confirmed they were also at the scene.
British Transport Police said an incident is ongoing and its officers are currently there.