One to watch: After a mag 5.7 strong quake Indonesian officials are worried Mount Agung volcano Bali is about to blow 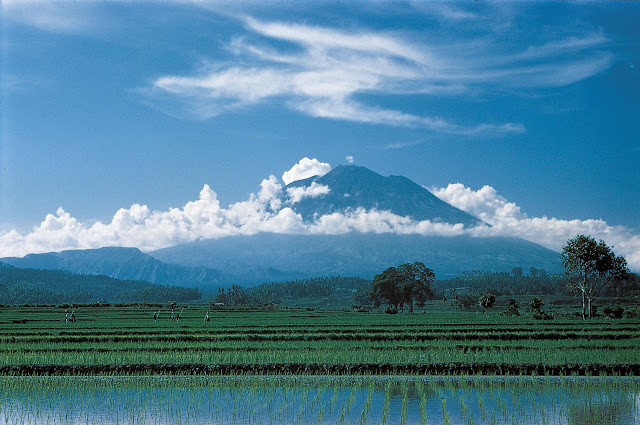 Photo 88adventure.blogspot.com
The volcano last erupted in 1963, emitting ash 10 kilometres high and killing more than a thousand people.
Bali's Governor tried to reassure worried locals that all measures were in place to cope with a possible eruption.
"This is a natural disaster, we cannot avoid it, we can't stop it exploding but we can reduce the number of victims and loses," Made Mangku Pastika said.
"If you have to evacuate, you evacuate."
Fears among the many Aussies heading over to Bali for the school holidays have increased amid a volcanic eruption warning and an earthquake.
Holiday-makers heading over to Bali have been urged to be vigilant amid fears of increasing seismic activity and the possibility of a volcanic eruption.
Fears have increased among the hordes of Australian tourists heading over to the hugely popular vacation destination for the school holidays, following a volcanic eruption warning and an earthquake detected off the coast of the Indonesian island.
Indonesian officials have this week warned tourists to avoid the area around Mount Agung in the island's north amid fears it could erupt.
The volcano, about 72 kilometres from the resort area of Kuta, is a popular tourist destination and hiking spot.
Officials have more than doubled the size of the no-go zone around the Mount Agung volcano and raised its alert level for the second time in less than a week, the Associated Press reported.
Phil Sylvester from Travel Insurance Direct is urging those travellers heading over to Indonesia to be watchful.
"Should you be worried about a volcano in Bali? Yes.
You should keep an eye on media reports and follow the advice of the authorities if they widen the evacuation zone or make clear that increased danger is imminent," Mr Sylvester told news.com.au. However, holiday-makers shouldn't rush to cancel their trips.
"Krakatoa- sized eruptions are extremely rare.
It isn't like the entire island is going to disappear in a puff of smoke.
It depends on where you are but there is an exclusion zone so as long as you follow that advice, you will be fine," he said.
The most likely thing that could affect your trip is volcanic ash clouds.
"Two years ago, there were volcanoes that blew ash clouds which meant that airspace over Denpasar was closed so people were stranded in Bali.
That is mainly the type of thing that could happen.
I don't think people should be particularly worried about being the victim of a volcanic eruption but they very well may be victims of interruption to transport."
This morning an undersea earthquake also struck off the coast of holiday hotspot.
The 5.7 magnitude quake was detected northeast of Kemeduran, which is northwest of Bali, the US Geological Survey confirmed.
With a magnitude of almost 6, the earthquake is classified as moderate to strong. It was measured at a depth of 588km.