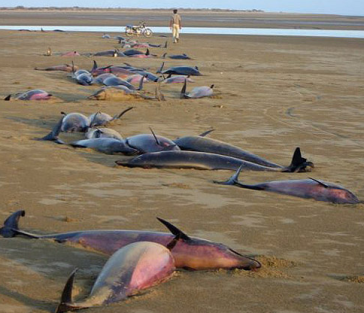 Every year an untold number of whales and dolphins wash up on beaches around the world and die, baffling experts.
Birds and even bees are also known to show up dead hundreds of miles away from where they should be.
Domestic animals and people are also known to be affected by Solar storms.
The Big Wobble has received reports from Alaska from friends who suffer from migraines and other side effects, such as seizures, when Solar storms hit earth.
They have also noted that dogs are having seizures at the same time as people are.
Jenna White and Bill Laughing-Bear have written a report for The Clarion Peninsula: Voices of the Peninsula: A connection between planetary alignment, solar activity, and TBI (Traumatic Brain Injury) explaining space weather caused people with TBI to suffer "Bad Brain Days," some ending up with seizures and others taken to the hospital.
Surely with all the technology and data available to the experts it is time to delve deeper into space weather and the effects it has on Earth, it has long been thought by some experts that not only does Coronal holes and CME's affect our species here on Earth but they also influence major quakes and volcanic activity.