A new cluster of 43 quakes overnight just 60 miles from Yellowstone the biggest being an impressive mag 5.3 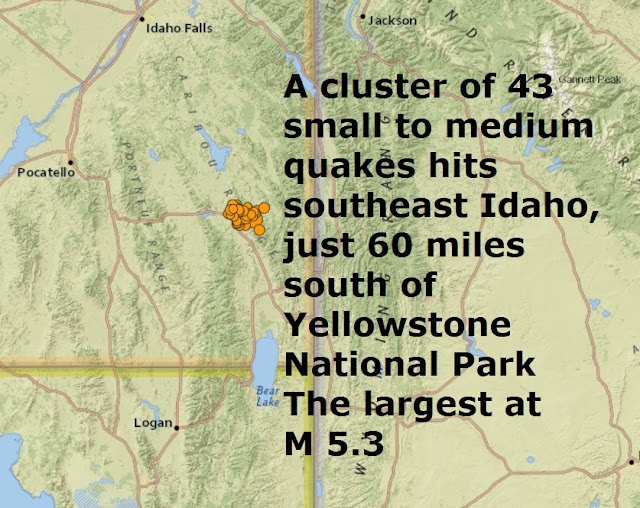 USGS
The U.S. Geological Survey says a moderate magnitude 5.3 earthquake has rumbled through southeast Idaho, just 60 miles south of Yellowstone National Park.
There were no immediate reports of damage or injuries.
The epicenter of the quake was located 11 miles east of Soda Springs, Idaho, and was also felt in Wyoming, and across northern Utah in Logan, Ogden, Salt Lake City, Draper and Provo.
The USGS reported four separate quakes Saturday evening in an area about 63 miles from Pocatello and 130 miles from Salt Lake City.
The largest quake at magnitude 5.3 struck just before 6 p.m. local time.
The USGS said a handful of smaller quakes followed for about an hour.
The agency says only slight damage occurs with earthquakes at that level of intensity.
An ongoing earthquake swarm at Yellowstone volcano is now one of the biggest ever recorded, with over 2,300 tremors since it began in June.
As of August 30, 2,357 earthquakes had been recorded.
The most powerful in recent weeks was magnitude 3.3; it took place on August 21.
The most powerful in the current swarm was a magnitude 4.4, which was recorded on June 15.
Yesterday's mag 5.3 is by far the biggest.

More on this below, from The Big Wobble