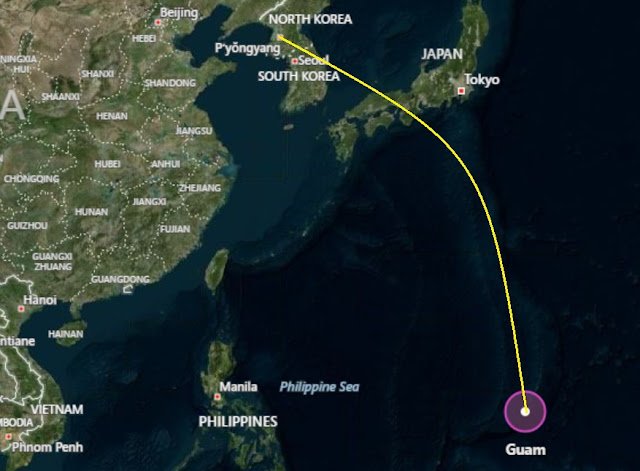 North Korea has said it is considering carrying out missile strikes on the US Pacific territory of Guam.
According to  The North's official news agency, The North Korean army are “carefully examining” an operation plan for attack on Guam: The KPA Separate DPRK army statement says military action by U.S. will be met with "just all-out war."

North Korea’s Strategic Force of the Korean People’s Army (KPA) is examining an operational plan for a medium-to-long-range ballistic missile attack on the island of Guam, a spokesperson for the organization said in a statement carried by the Korean Central News Agency (KCNA) on Wednesday. The plan, the details of which were reportedly outlined yesterday, is in response to the U.S.’s test launch last Wednesday of the Minuteman-3 intercontinental ballistic missile (ICBM) from California’s Vandenberg Air Force Base and of the recent arrival of six B-1B Lancers at the Andersen Air Force Base in Guam. Guam is a U.S. territory and home to several American military bases.
The U.S. flew B-1B bombers over the Korean peninsula on the 30 July, in a response to North Korea’s second test of the Hwasong-14 ICBM, and again yesterday, according to the KPA statement. “The Strategic Force of the KPA has taken special note of such maneuvers,” the statement reads. “The KPA Strategic Force is now carefully examining the operational plan for making an enveloping fire at the areas around Guam with medium-to-long-range strategic ballistic rocket Hwasong-12 in order to contain the U.S. major military bases on Guam…”
The statement said that U.S. strategic bombers “get on the nerves of the DPRK” with their “frequent visits to the sky above south Korea.”
The plan will be “will be put into practice in a multi-concurrent and consecutive way” on the order of Kim Jong Un, it added.
“The U.S. should clearly face up to the fact that the ballistic rockets of the Strategic Force of the KPA are now on constant standby, facing the Pacific Ocean and pay deep attention to their azimuth angle for launch.”
In a separate statement also released on Wednesday, the General Staff of the Korean People’s Army (KPA) condemned recent talk of military action against North Korea from policymakers in the U.S.
A military intervention against the DPRK would be met with a “just all-out war,” the statement said, which would seek to destroy “the strongholds of the enemies including the U.S. mainland.” “…the army of the DPRK will turn the U.S. mainland into the theatre of a nuclear war before the inviolable land of the DPRK turns into the one,” the statement added.
The KPA also said that a U.S. preemptive strike against North Korea missile and nuclear targets would be “mercilessly repelled” by the DPRK armed forces, and would lead to a regional conflict. “Preemptive strike is no longer the monopoly of the U.S.,” the KPA said, saying that they would “burn up” all U.S. military assets in the area, “including Seoul.”
Referencing recent comments by Senator Lindsey Graham, as well as Secretary of Defense James Mattis and Chairman of the Joint Chiefs of Staff James Dunford, the KPA promised a “preemptive retaliatory operation of justice” if it saw even a “slight sign” of a U.S. “beheading” operation against North Korea’s leadership.
“Once the U.S. shows a sign of starting to carry out the foolhardy plot, we will launch the Korean-style pre-emptive retaliatory operation of justice to annihilate the masterminds of the thrice-cursed operation and all the criminals involved in it,” the statement reads.
“The U.S. will be forced to suffer an imaginably terrible disaster for the ‘beheading operation.'”
The statement also attacked an alleged U.S. plot to foment regime change and social upheaval in the North, saying that U.S. was encouraging “murder, arson, destruction with the use of rogue-like special commandoes to be infiltrated into the DPRK.”
“The “secret operation” touted by the U.S. policy-makers is a foolish scheme aimed at bringing down the social system of the DPRK,” it added.
The comments by North Korea’s military come hours after U.S. President Donald Trump promised “fire and fury” against the DPRK should it continue to threaten the United States.
“(Kim Jong Un) has been very threatening… and I said they will be met with fire, fury and frankly power, the likes of which this world has never seen before,” Trump said.