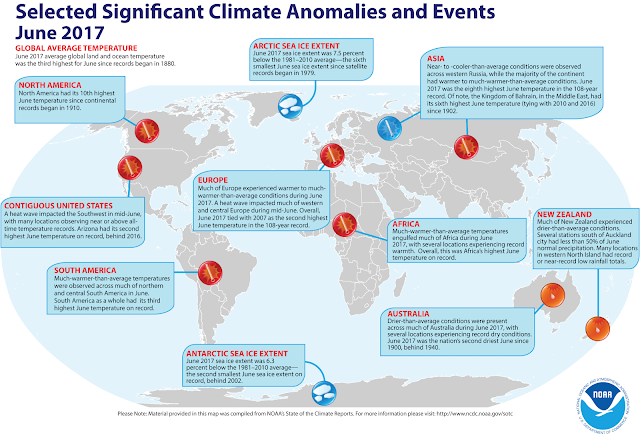 Credit NOAA. Click on image to enlarge
The latest NOAA monthly report on our planets climate reveals it was the 2nd warmest year to date and 3rd warmest June on record, carrying a trend which begun at the end of 2014, 2016 was the hottest year ever with 2015 a close second.

Our climate has changed and I can't understand why people say otherwise, everyday, The Big Wobble headlines climate records and extremes from around the world.
Throughout history records have been broken, I get that, however, every month now appears to be extreme.

Here in Holland it is now the holiday season and a time when Dutch families jump into their cars or campers in hoards and head south to France or Spain, I myself have made the trip many times, when the destination is completed car or camper is covered with thousands of dead insects which are very difficult to clean off, I spoke to a friend today and he said his car was almost devoid of insects after his journey down to southern France, which leads the question, where did they all go?
This week The Met Office claimed the storm above Cornwall on Wednesday morning produced almost 150,000 lightning strikes in a two hour period which is by far unprecedented and smashed the old world record by a country mile.
The old record was a mere ten thousand lightning flashes which lit up Hong Kong's night sky over the weekend (Jul 9-10-16) during a thunderstorm that lasted for twelve hours.

Last week a TRILLION-ton iceberg which is the equivalent of a 64-storey tall building broke free and has reduced the size of the Larson C ice shelf by about 12 per cent.
On the same day The Big Wobble reported warped roads sinking buildings eroding river banks, slanting spruce trees as permafrost in Bethal Alaska is deteriorating and shrinking.
The number of countries which have suffered record breaking heatwaves recently is too many to report along with the wildfires which is a deadly spin-off from the heat.

Below are some highlights of NOAA's report.
In terms of Earth’s seasonal change, June is a significant month: It marks the summer solstice for the Northern Hemisphere and the winter solstice for the Southern Hemisphere.
It also means the calendar year is half-over, and it’s time for a climate check-up.
Let’s dive deeper into our monthly analysis to see how the planet fared for the month and the year to date.

Other notable climate events and facts around the world last month included
Below-average sea ice at the poles continues
The average Arctic sea ice extent (coverage) for June was 7.5 percent below the 1981-2010 average, the sixth smallest for the month since satellite records began in 1979.
The average Antarctic sea ice extent was 6.3 percent below average, the second smallest on record for June behind 2002.
Warmer-than-average lands and oceans
The globally averaged land-surface temperature (fourth warmest for the month of June) and the sea-surface temperature (third warmest) ranked second highest on record for the year to date.
Africa and Europe lead the continents in warmth rankings Africa had its warmest June on record; Europe, its second (tied with 2007); South America, its third (tied with 2005); Asia, it’s eighth; North America, its 10th; and Oceania, its 50th (tied with 1927).