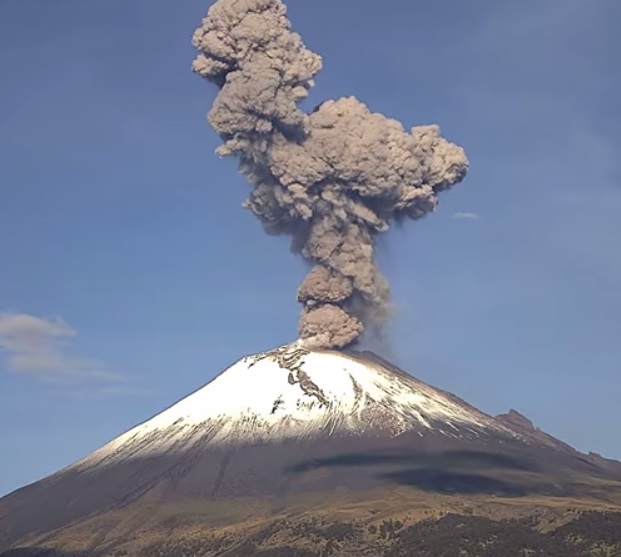 Photo Webcamsdemexico
Mexico's Popocetepetl volcano erupted early Sunday (2 July) morning, sending a column of smoke and ash soaring into the sky, the National Disaster Prevention Center announced. Officials said there were 136 low-intensity exhalations from the volcano recorded.
Ash fallout was reported in several towns in Mexico State, including Ozumba, Amecameca, Tlalmanalco, Chalco, Ayapango, Tenango del Aire and San Pedro Nexapa, El Sol de Mexico reported. Luis Felipe Puente, the national coordinator of Civil Protection, said the eruption had sent a column 2 kilometres (1.2miles) into the sky.
The volcano's opening was glowing at night as it erupted, El Sol de Mexico reported.
During the day, the volcano continued to erupt, sending smoke and ash in a northeastern direction. Three eruptions were recorded with a moderate amount of ash pushed northeast of the volcano. According to El Universal, Puente also shared recommendations in light of ash fallout from the eruption.
He suggested residents sweep roofs, attics, patios and streets of all ash and place the ash in bags so it does not get into the water system.
He also recommended residents close windows and remain at home.
Residents were warned to close any outdoor water supplies to avoid contamination.
Puente also urged residents to cover their noses and mouths with masks or damp handkerchiefs.
The volcano is being placed in a Yellow Phase 2, which means it could continue to erupt at low to intermediate intensity.
Authorities are asking that residents to remain away from the volcano and have set up a perimeter of 12 kilometres.