The "Incompetence Syndrome"; Struck With Blindness! Our leaders are being manipulated by the powers of this dark world and against the spiritual forces of evil 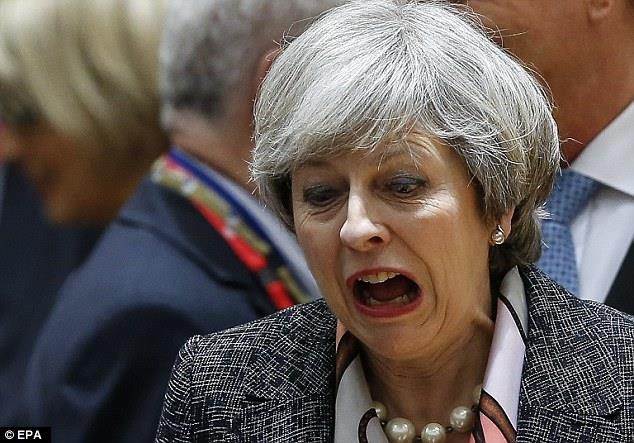 The only people in today's world who can comprehend matters clearly, are those that are not struck with the "blindness" that the Bible states will come upon people in the end times.

Those who can't, or won't, accept the Kingdom of the Heavens, governed by Jehovah and his wonderful son Jesus Christ, as their ruling government will not survive. At this point in time we can do nothing to help those that are struck with this "blindness". It is out of our hands and beyond our control.

This "blindness", or inability to comprehend, can be easily recognized in ones that have it. Another way of recognizing ones who "won't make it" are the questions that they ask, or fail to ask.

I read the above quote on a forum back in 2009 and was written By Norval Cunningham.
I remember when I read the article how true it is but totally  unaware of how the "Incompetence Syndrome" would increase so dramatically in the next 6 years.

For instance, just 2 weeks ago, English Prime minister Theresa May was so strong in her position, with a majority in Parliament and a 40 point lead in the polls over her socialist opposer Jeremy Corbyn, she decided to call a snap election to gain an even higher majority in Parliament and crush her opponents and take total control of her own government, she was so strong it was thought she was invincible.
Two weeks later she had lost her majority, lost another 60 seats in Parliament and handled the London tower block fire so badly, she has been called a coward and incompetent by many and she resembles a stunned rabbit stuck in front of a car's headlights.
She has, you could say, been struck by blindness after having total control

Last November another women, Hillary Clinton had total control, with an insurmountable 10 point lead over Donald Trump.
However she had a terrible election, with one disaster after another and hugely missing the mood of the people.
Donald Trump on the other did his best to hand the election to Clinton with a plethora of gaffs and insults at minority communities.
The day before the election the polls still had Clinton as unbeatable, the rest is history.
It’s fair to say Clinton was struck by blindness during the election fight.
This "blindness", or inability to comprehend, can be easily recognized in ones that have it. Another way of recognizing the one’s who do have it can be seen through the questions they ask, or fail to ask.

Another seismic shake occurred just a couple of months before the American Election.
Brexit is a commonly used term for the United Kingdom's proposed withdrawal from the European Union (EU). The British government led by David Cameron held a referendum on the issue in 2016; a majority voted to leave the European Union.
The result shocked the world, once again the polls suggested the Brits would vote to stay in the European Union, they narrowly voted to leave leaving Cameron having no choice but to resign from his post as Prime Minister.
Leaders, politicians and religious leaders around the world can clearly be seen to be suffering from an  "Incompetence Syndrome"; Struck With Blindness!
It is a sign of the times and leads me straight to another Bible quote…

We have seen this last two months in Britain the powers of this dark world and the spiritual forces of evil, a suicide bomber who blew himself, small children and young girls to pieces at the Ariana Grande concert in Manchester.
Another terrorist attack in London, just last night, a ‘white man’ who screamed, ‘I want to kill all Muslims’ ploughed his van into a group of worshipers outside a mosque in London, killing one and injuring many more, which is the worst case of Islamophobia in Britain so far.
For the third time in three months, police are now investigating a vehicle which has ploughed into innocent people going about their business, along with the horrific fire at the London tower block earlier this week, the UK has suffered a horrendous couple of months, with dark forces coming to the fore.

If you are a person in today's world who can comprehend matters clearly, then you will be well aware this "Incompetence Syndrome"; Struck With Blindness will become much much worse in these end times but we who have faith know evil will lose some time soon
But stay awake!  Satan is out there and is like a roaring lion knowing his time is short.