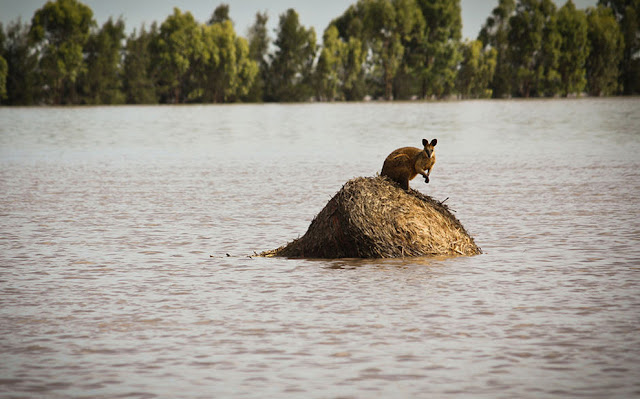 Photo Boston.com
A week of record breaking rain and floods has killed at least two people with another one missing with massive damage to crops and infrastructure across Western Australia.
Western Australia Premier announced that the heavy rain has affected huge areas of the state, including Swan Valley, where it has had a dramatic impact on grape growers, as well as parts of the Kimberley, the Pilbara, the Gascoyne, Mid-West areas and the south coastal areas.
The flooding has been described as some of the worst in decades and is estimated to have caused hundreds of millions of dollars in damage with roads, bridges and farms affected.
On a visit to affected areas in the Swan Valley, WA Premier Colin Barnet said that “an enormous volume of water has fallen and is probably the biggest flood we have had in 20 years.”
“Many of the grape producers here have lost a significant amount of their grape crop, damage to their vines and some have lost virtually everything.”
There are still many areas with current flood warnings in place. WA Department of Fire and Emergency Services warned earlier today that flooding was likely in the Swan and Murray Catchments in Perth Metropolitan area, reported Floodlist .com.

Record Rainfall
The period between 09 to 10 February saw some of the heaviest rainfall. On 10 February, Kalgoorlie recorded 37mm of rain in just 1 hour. In a 24 hour period to 10 February, Yangedine recorded 75 mm. During the same period, Perth recorded 114 mm of rain, making it the second wettest day on record. The highest remains 9 February 1992 when 120.6 mm of rain fell.