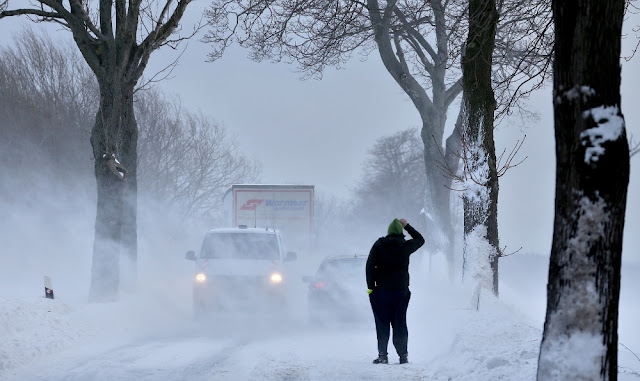 Photo the local
Storm "Egon" is sweeping across Germany with hurricane-force winds and snow, leaving at least one driver dead, thousands without power and more than 100 flights cancelled.
Near Fulda in Hesse, a 21-year-old driver was killed when he tried to overtake another driver on a "glass-like" roadway, according to Hessenschau.de.
His car started to swerve and he hit another oncoming vehicle.
The 70-year-old woman in the other car was lightly injured.
No 'all-clear' for train travellers yet, In various parts of the country, train travel has been delayed due trees falling onto tracks and other obstructions caused by the storm.
A railway spokesperson told Bild newspaper at about 3.15pm that they could not yet give travellers the all-clear.
"Our colleagues are working at full speed to retrieve fallen trees from platforms, repair overhead wires, and make the routes drivable again," the spokesperson said.
"We cannot completely give the all-clear to passengers because the snow front is still underway."
The roofs of some houses have been damaged in the storm, including the one pictured below in Hanau, Hesse.
Snowplow driver Uwe Deppe in Lower Saxony tells DPA about his determination to make driving easier amid storm Egon.
"I get every street clear," Deppe said.
"At the end, we always win the battle against snow and ice."
So far the 60-year-old has been working through the night, and by mid-day there appeared to be no end in sight.
Deppe has already driven 400 kilometres on the 10-kilometre stretch he's been clearing between Bad Harzburg and Torfhaus. "We will drive until the street is black again."
A driver along the Autobahn 7 in northern Schleswig-Holstein died in an accident, most likely due to slippery roads, police said.
Numerous streets in Bavaria and the Thuringian Forest area were blocked by fallen trees or trucks that were stuck.
According to Thuringia officials, these obstacles also meant that schools buses could not bring children to school.
"The situation is chaotic," said a spokesman from the area of Schmalkalden-Meiningen.
In the Bavarian town of Kirchenthumbach, one school bus was blown by a gust of wind into a roadside ditch, but no one was injured.
Leipzig-Halle and Dresden airports said they had to cancel flights after Frankfurt airport announced the cancellation of 125 flights.
Lufthansa flights to Frankfurt had been cancelled from Leipzig, and another flight from Dresden to Frankfurt was also cancelled. Frankfurt-Hahn airport also reported delays.
As of about noon on Friday, 6,600 households in Upper Franconia, Bavaria were left without power. In Baumholder, Rhineland-Palatinate, US military personnel of the Army Garrison in the area were given early release due to the storm.
Skiers in the Bavarian Alps were left in the lurch as well due to Egon as ski lifts and mountain cable cars have been completely or partially suspended in some areas, reports local broadcaster Bayerischer Rundfunk.
The railway and chair lift going up the Zugspitze - Germany's highest mountain - were almost completely suspended, and ski operations have been halted.
The DWD posted an image on Twitter showing where German residents can expect to experience the fiercest weather conditions.
The more red area means "high risk of bad weather", while the orange area means "bad weather risk". The high risk areas could have 10-20cm of snow and in mountainous areas this could be up to 30cm. The orange areas meanwhile are predicted to get 5-10cm of snow.
The major air hub of Frankfurt Airport has had to cancel 125 out of 1,100 flights due to the storm, a spokesperson said.
Due to the cancellations, further delays should be expected during the day.
"The storm is so strong that airplane operations must be temporarily halted," said the airport spokesperson.
In Bavarian Lower Franconia, several school buses could not bring children to school due to the severe weather.
Most children were brought to nearby schools instead.
The strong winds of Egon have uprooted trees and caused power outages as well as traffic delays in western states like Saarland and Rhineland-Palatinate.