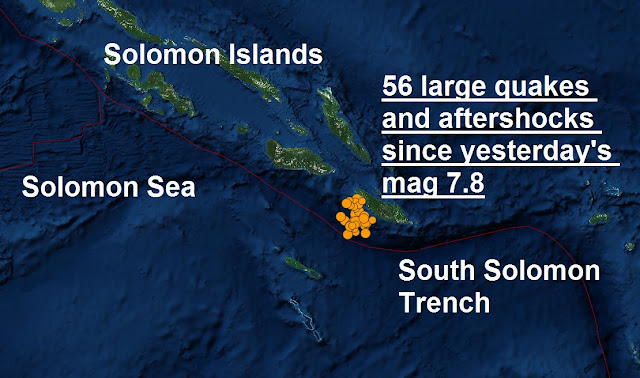 A humanitarian agency says initial reports from the Solomon Islands suggest 3000 people have been affected by the earthquake and many buildings damaged.
WorldVision, a charity with staff in the island nation, said the quake damaged buildings included homes, a hospital, a church, and a WorldVision office.
Power was cut in Kirakira, the provincial capital of the island nearest the quake's offshore epicentre. "Some twenty patients were also evacuated from the Kirakira hospital which was damaged by the earthquake.
"Communities along Makira's coast and in neighbouring South Malaita reported earthquake damage to houses but with limited road access and poor communication, the full extent of damage is unknown.
"Early reports from the National Emergency Operations Centre report that over 3000 people in the provinces of Makira, Malaita and Temotu have been affected by the earthquake, with many homes destroyed."
WorldVision Solomon Islands country director Janes Ginting? said a family in the provincial capital narrowly escaped when the wall of their family home collapsed during the quake.
"World Vision has pre-positioned supplies including mosquito nets, tents, soap, buckets and rope in place and is ready to support the Solomon Islands government to assist affected children and families," Ginting said.
The massive earthquake in the Solomon Islands early on Friday felt "eerily similar" to the mid-November Kaikoura quake that smashed the northeast of the South Island.
Both were magnitude 7.8 events, a person who experienced both said.
Unicef NZ programmes manager Hamish Lindsay, who was in Honiara when the quake struck, said he got out of bed on his hotel room and went under a table.
"I live near Nelson so it was a good shake.
It didn't last as long as the New Zealand quake, maybe 30 seconds," he said.
We are standing ready to assist and keep children safe.
"It was a strong side to side movement with a few items falling off the table.
The room I was staying in was on stilts, so I had been checking it out a few days ago, with the NZ quake still in my mind, and was pleased to see cross braces in place."
"It felt eerily similar," to the Kaikoura quake.
There are currently 17 New Zealand police officers stationed in Honiara, on the northwest of Guadalcanal Island, to support the Royal Solomon Island Police Force.
Detective sergeant Darren Folau said the earthquake was a rude awakening in the early hours.
He said there did not appear to be much, if any, damage to buildings or infrastructure in the capital and reports from other islands indicated no casualties, or injuries.
"It was a pretty significant earthquake.