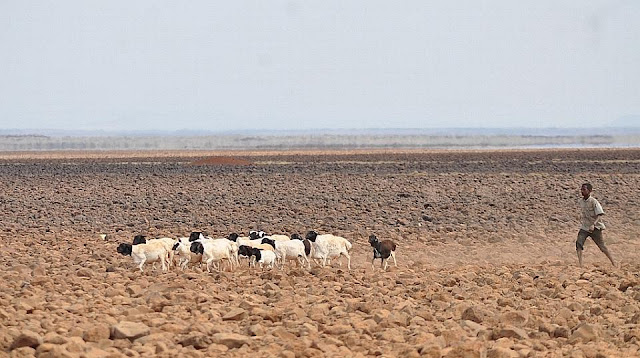 Photo www.coastweek.com
A humanitarian crisis is looming in Garissa County following a persistent drought that has affected thousands of pastoralist families.
The drought that has led to the drying up of water sources and the depletion of pasture for livestock. The affected families have appealed to the government and the international community to quickly intervene as threatens their lives and those of their animals.
Most water points have dried up with the few remaining ones having foul-smelling water which both the residents and their animals are depending on for survival.
Many have to walk for over 30 kilometres to look for water for drinking and for domestic use. Schools and health facilities in Ijara Sub-County, one of the areas hardest hit by the drought, are on the verge of shutting down.
According to residents who spoke to Nation.co.ke, children in the areas affected by the drought have also shown signs of contracting of water-borne diseases such as diarrhoea as they lack clean water to ensure proper hygiene.
When the Nation visited the only water dam in Korisa Location in, locals could be seen busy drawing the dirty, smelly water.
They competed for the scarce resource with animals seeking to quench their thirst.
Goats and cows which looked emaciated had to be assisted by their owners out of the muddy wells as they had become weak after walking for long distances.
"Thirsty wild animals are fighting with people for the access of the only water source in this area. "Residents are forced to take turns day and night to keep away buffaloes from the dam, but now we have given up because it is extremely risky to ward off the thirsty wild animals as they come in big numbers," a resident, Mr Haret Nasteh said.
He said most livestock have moved deep into Boni Forest, between Ijara and Lamu, in pursuit of pasture as the drought situation worsens.

They are killing the bees too! Millions of bees dead after Florida and South Carolina spray for Zika mosquitoes
at September 23, 2016