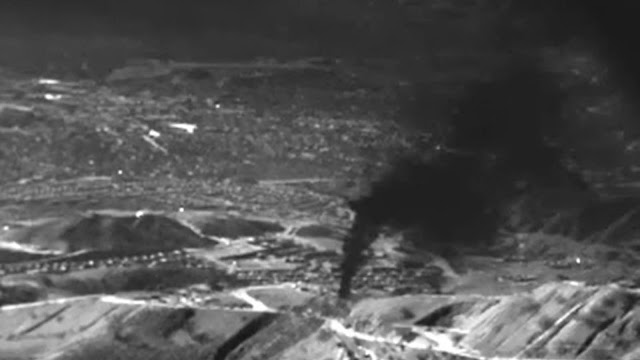 Photo www.npca.org
There's been another leak at a Los Angeles-area natural gas storage field where the nation's largest methane release forced thousands of people from their homes.
Southern California Gas tells that a minor leak was discovered last Saturday in a buried pipeline at the Aliso Canyon storage facility.
Spokeswoman Melissa Bailey says the leak was quickly stopped and posed no safety hazard. However, homeowners in nearby Porter Ranch are arguing that the entire underground storage field is dangerous and should be shut down.
A leaking well at the site spewed huge amounts of methane into the air from last October until February.
Thousands of San Fernando Valley residents complained of health problems and left their homes.

The Aliso Canyon gas leak (also called Porter Ranch gas leak and Porter Ranch gas blowout) was a massive natural gas leak that was discovered by SoCalGas employees on October 23, 2015.
Gas was released from a well within the Aliso Canyon's underground storage facility in the Santa Susana Mountains near Porter Ranch, Los Angeles.
The second-largest gas storage facility of its kind in the United States, it belongs to the Southern California Gas Company, a subsidiary of Sempra Energy.
On January 6, 2016, Governor Jerry Brown issued a state of emergency.
The Aliso gas leak carbon footprint is said to be larger than the Deepwater Horizon leak in the Gulf of Mexico.
On February 11, 2016 the gas company reported that it had the leak under control.
On February 18, 2016, state officials announced that the leak was permanently plugged.
An estimated 97,100 tonnes (95,600 long tons; 107,000 short tons) of methane and 7,300 tonnes (7,200 long tons; 8,000 short tons) of methane was released into the atmosphere, making it the worst natural gas leak in U.S. history in terms of its environmental impact Wikipedia

130 million tons of a 4,000-foot-high mountainside collapse in Glacier Bay National Park
Alaska
A real "Day After Tomorrow"on the cards as the Jet Stream, the Gulf Stream both stutter and a Solar Minimum on the way!
Warning to people in New Mexico after 20 year old woman dies from the deadly Hantavirus Pulmonary Syndrome disease
at July 07, 2016