We do live in very strange times these days, we live in a time when good is more often than not seen as bad—Bad, is often seen as good! President Biden's quotes were fired from the hip, blunt, honest and right to the bone—And, exactly what the world has been waiting for 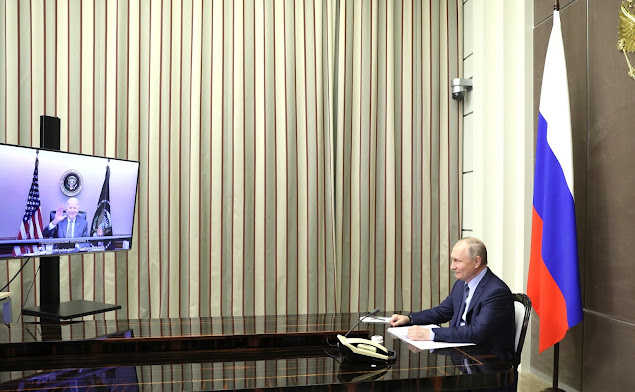 For instance—President Biden, (he's called sleepy Joe by some) not only called President Putin a Butcher this weekend but almost triggered WWIII when he passionately called for,"Putin to be removed from power during a meeting with the Polish President!" His primal outburst was later described as an "unscripted remark"  by red-faced White House officials who were left to clean up the mess.
President Biden was instantly rebuked by President Macron of France, other European leaders as well as the "butcher" himself. President Biden's quotes were fired from the hip, blunt, honest and right to the bone—And, exactly what an American President should have said to his Russian adversary who is killing innocent people. The world has been waiting for this show of strength from President Joe Biden! "Well, done Joe," I say anyway. Putin is a butcher and should be removed from power—Period! We should, as westerners be prepared to fight and not be scared by Putin's Nukes.
A New Model Army—Financial Ideology!
While NATO and Western leaders sit on billions of dollars worth of military hardware and divisions of troops (is it all needed for a parade or something?)—They choose to tip-toe around and by passing a very smug looking President Putin, not wanting to offend him for fear of escalating the conflict (are they scared of his feral eyes?)—This kind of cowardice is exactly what their forefathers did 80 years ago (history repeating). While NATO and the West are desperately hoping for some kind of dialogue, Putin is busy recruiting 16,000 Syrian mercenaries, and promising to pay them $7,000 a month to fight his war for him, $50,000 if they should fall in combat. You don't recruit 16,000 extra fighters if you want peace! No one knows the misery of war more than the Syrians, yet they need to provide for there families—And who knows, maybe Syrians who fought against the tyranny of Putin are now fighting for him—Maybe Syrians who fought each other a couple of months ago are now fighting together? If you have a wife and a handful of kids and no prospect of work, well—Your gonna fight, rightly or wrongly, you have to feed the kids!
Putin now has Syrians and Chechens fighting for him, when will he recruit ISIS I wonder?
"God-given unity of Holy Russia."
Meanwhile, the Christian world and religious leaders have been desperately waiting for Russia's leader of the Orthodox Church, Patriarch Kirill to speak out against Putin and the cruel invasion of their neighbours, Ukraine. However, you guessed it, the 78 year old spiritual leader has done just the opposite. In his weekly sermons which are broadcasted live to the Russian people he has supported the war claiming it is an apocalyptic struggle against "evil" people who are trying to deny the "God-given unity of Holy Russia—Good luck with that Mr Kirill!
President Putin, attending a pro-war rally in Moscow last weekend also quoted "Jesus" to justify the invasion of Ukraine: He said—Quote, "words from the Bible come to my head"—"There is no greater love than to lay down ones life for a friend." John 15:13—Who's life is he talking about, I wonder?
Someone once said—"If you want to know what God thinks of money, look at the people He gives it to!"
In London yesterday—A Prince, formally known as Prince Andrew, who was stripped of his royal duties and forced to quit public life recently after he was charged with sexual assault and battery—And told to a pay a woman he "allegedly never knew," millions of pounds in damages—And is famous for his association with the paedophile Jeffrey Epstein and is described by many as very arrogant, was allowed to chaperone the Queen of England during the memorial service of her late husband, Prince Phillip, leaving the rest of his family dismayed!
A family source told the Daily Mail that senior royals, including future kings, Charles and William were "dismayed" by Andrew's decision to put himself, "front and centre" of the service, causing consternation among the family! Hmmm. . . They say, "You can't choose your family." I think you or me may have kept our heads down and stayed low!
“At your highest moment... be careful. That’s when the DEVIL comes for you!”
Denzil Washington's advice above to Will Smith on Sunday may have come a little too late for the Oscar winner after he made the politically incorrect decision to slap his comedian colleague Chris Rock—Live on stage, after the comedian called his wife GI Jane, in a reference to her near bald-head. Apparently Will Smith has a history of slapping people in public and has been known to make jokes about bald people too! Chris Rock has a history of poking fun at Will Smith's wife too. I don't know if the joke was out of order, funny or rude or otherwise—I can't get my head around American comedy anyway, I'm sorry but I don't find it funny at all. I do know one thing though, the joke may of not made me laugh, but the slap certainly did!
Mr Smith did apologise to Mr Rock, so there you go, whether you are a comedian, or an Oscar winner, we are all capable of making mistakes I guess!

They're all killing innocent people Gary, all of our so called leaders are murders/criminals/liars/and phoney greedy sinful people only capable of malice because they belong to their father of lawlessness and evil!
Why would you spend 16k on military equipment if you want peace? Why would NATO spend billions on the same if it is to promote peace! Why are American presidents in charge of removing foriegn leaders, in the name of peace always, when that removal process for peace is by way of more military means that usually always involves killing innocent people?
This is what people ask for nevertheless. This conflict said has turned people in to cold ignorant fools. Everyone is acting like it is a football game, rooting for sides and cheering their team kicking ass, but kicking ass means innocent life got killed. It is so irritating to my ears to hear this being said. Ra ra Ukraine, they are kicking Russian ass. That is what my friends told me this week. Shocking but telling.
I have days when I think I wish one of those solar flares you write about would hit earth so spot on that all TV and internet is blown to smithereens. Nothing but another poison product capturing and deluding brains.

Yep, I absolutely agree. Life is cheap, especially to our so-called "leaders." On another note, thousands of Brits have applied to share their homes with Ukrainian refugees but the British government are finding ways NOT to issue visas to the refugees, how cynical is that?

Thanks for that update on the refugee situation. Business as usual, aye!? I hear you Gary and agree. It's just one more visual that proves the true intentions that are behind peace through war. Liars!

There's a lot not being said here. What about the US weapons' industry that's busy selling weapons right and left during the war? It's like they're up on the front line, selling stuff. And I heard that Zelensky's finance minister was a former director at Mc Kinsey.