Signs And Wonders—Another near miss! Massive and very powerful solar flare filmed by NOAA showing Coronal Mass Ejection being thrown millions of kilometres into space missing planet Earth—An impact like this would propel mankind back to the Stone Age and is a matter of when not if!

Solar Cycle 25 (the latest solar cycle) is heating up after NASA and NOAA told us it would be a quiet affair, however it's not. New sunspot counts from NOAA confirm that the young solar cycle is outperforming the official forecast. The monthly value at the end of January 2022 was more than twice the forecast, and the highest in more than 5 years. An X-class flare in January could have caused insurmountable damage to Earth's electronic systems had it hit our planet but—Luckily, missed. The solar flare filmed above by NOAA caught the Coronal Mass Ejection being thrown millions of kilometres into space.

Powerful X-class flare filmed in the middle of January 2022:

A possible X-Class flare earlier last month on the far side of the sun. Credit SOHO

Solar Cycle 25 is heating up. New sunspot counts from NOAA confirm that the young solar cycle is outperforming the official forecast:

Sunspot counts have exceeded predictions for 16 straight months. The monthly value at the end of December 2021 was more than twice the forecast, and the highest in more than 5 years. Credit, Spaceweather.com. And that would agree with last year's major quake count of 160—(mag 6 or higher) which was the highest yearly count since the record 'bustin year of 2011. 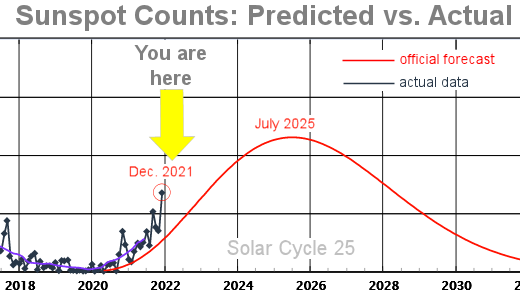 According to NOAA and NASA, this new Solar Cycle, number 25 was predicted to be a quiet, somber affair, however, so far it has proved to be anything but, see graph above. They predicted that Solar Cycle 25 would peak in July 2025 as a relatively weak cycle, similar in magnitude to its predecessor Solar Cycle 24. Instead, Solar Cycle 25 is shaping up to be stronger. Indeed, geomagnetic activity has nearly tripled since the new solar cycle began.

If an asteroid big enough to knock modern civilisation back to the MIDDLE AGES appeared out of deep space and buzzed the Earth-Moon system, the near-miss would be instant worldwide headline news. Ten years ago, Earth experienced a close shave just as perilous, but most newspapers and the tv media didn't mention it. The "impactor" was an extreme solar storm, the most powerful in as much as 150+ years. "If it had hit, we would still be picking up the pieces," says Daniel Baker of the University of Colorado.

Extreme solar storms pose a threat to all forms of high-technology. They begin with an explosion--a "solar flare"—in the magnetic canopy of a sunspot. X-rays and extreme UV radiation reach Earth at light speed, ionizing the upper layers of our atmosphere; side-effects of this "solar EMP" include radio blackouts and GPS navigation errors. Minutes to hours later, the energetic particles arrive. Moving only slightly slower than light itself, electrons and protons accelerated by the blast can electrify satellites and damage their electronics. Then come the CMEs, billion-ton clouds of magnetized plasma that take a day or more to cross the Sun-Earth divide. Analysts believe that a direct hit by an extreme CME such as the one that missed Earth in July 2012 could cause widespread power blackouts, disabling everything that plugs into a wall socket. Most people wouldn't even be able to flush their toilet because urban water supplies largely rely on electric pumps. Full story

The US National Aeronautics and Space Administration is tracking an immense, growing, and slowly splitting "dent" in the Earth's Magnetic field. The area, known as the South Atlantic Anomaly, is situated in the southern hemisphere between South America and the southern Atlantic Ocean off the coast of southwestern Africa. According to recent NASA monitoring and modelling, the area is expanding westward and becoming weaker and expected to completely split into two separate cells, each spanning thousands of kilometres across, very soon. Full story

A coronal mass ejection mentioned in the Bible?

In Revelation 8:7 John appears to describe a coronal mass ejection; The first angel sounded and there followed hail and fire mingled with blood, and they were cast upon the earth: and the third part of trees was burnt up, and all green grass was burnt up.

If a massive coronal mass ejection happened today like the one in 2012 facing the Earth, within 30 minutes, the flares would reach Earth’s magnetosphere and trigger a geomagnetic storm. According to Brent Miller the religious academic, Plasma leaving the sun would be 2 million deg F, by the time the ejection reached Earth the plasma would be liquid fire at 6,000 deg F. The plasma would cause a pressure wave which would push through the outer atmosphere which is minus 150 deg F into the stratosphere freezing all the water crystals into ice causing ice and hale, the heat would follow causing hundreds of aeroplanes in the air at the time to crash. The heat would then continue to burn the part of the Earths vegetation, (hail and fire mingled with blood).

Very good. There is no doubt what is coming: https://raptureandendtimes.com/2021/05/15/alert-secret-signs-in-the-sun-and-the-final-countdown/


Steps to EFFECTING a Hoax :

How would Biden & Team expect
to win while Biden could not get 60
people on a parking lot ! (( hidden
by MSM using cropping of pictures
and videos )) when Trump was able
to attract 16,000 into a stadium ?

—because gain-of-function efforts
ALWAYS Fail, because of this one
rule driving THIS universe of things :

Every variant of ANY bug handed
down from initial infectivity, is LESS
and LESS and LESS potent !

Another clue those idiotic masters
of DECEIT had done, was to inform
us in July of 2020 :

[ MSM reporting that : ] “The normal
year-to-year cold and flu infections
are down 98%.”

Why the idiots reported that ?—
because more and more people
had been asking:

“What happened to colds and flu?”

To what EVIL End, all this Kabuki
Theatre by ELITE, can’t-get-the-girl
psychopaths ? : the Climate Change
hoax!, as means to create One-World
Government, under the auspices of a
U.N.-directed/-imposed Global
Economic Socialism/Communism.

Precession is an Earth-cycle of about 25,500
years, which always-recurring Earth-cycle is
billions of years old, where the tilt of the
Earth rotates around its axis, causing CLIMATE
Change—effecting shifts in Climate from
glaciation-to-warming-and-back-again periods,
NOT due to manmade pollution ( NOT due to
“greenhouse gases” ).

Anyone there know about that Solar-Cycle ?

Co2 pollution - re IMPACT on CLIMATE - is
akin to tossing a marble into an olympic-sized
swimming pool.

WARMISTS hope to reduce Co2 to ZERO!, even
though Co2 is food for plants and trees and
ocean flora !

If you examine non-WARMIST scientists’ research,
they gravely WARN us of starvation from a
coming ( “minimum” ? ) glaciation period.

Find and study the late Robert Felix’s book,
“Not by Fire but by Ice”—a fine introduction to
the above paragraphs ( at least, read his last page ).

If you give it a fair/serious reading, you might be
prompted to begin to finance Hydroponic Facilities
across the U.S.

Curiously, there is one in West Virginia that is
massive!—and one near my property.

Why? Do they serve in-the-know military interests ?

Are you prepared—just in case ?

Please consider sending
my letter to friends and
colleagues.