A maximum-security prison in regional NSW, Australia had be emptied of inmates after it was lost to gangs of "MICE!" $100 million mouse plague caused up to $100 million worth of damage and sparked a mental health crisis in parts of Australia 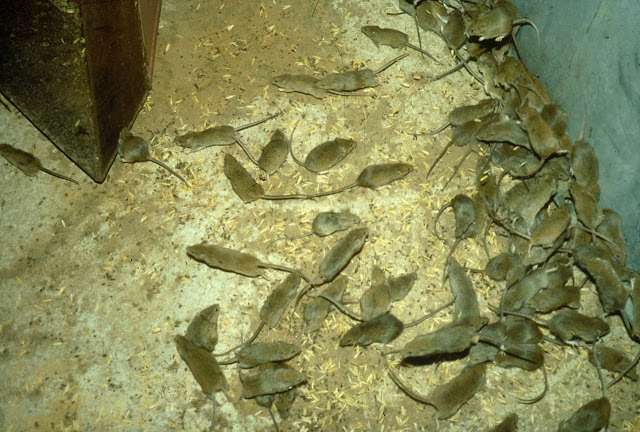 In June, they caused all 420 inmates at Wellington Correctional Centre in the state's west to be sent to other facilities after they damaged the building, a budget estimates hearing heard on Friday. Prison staff were working in buildings where cavities and ceilings were full of dead mice, Acting Corrective Services NSW Commissioner Kevin Corcoran told the hearing.
"I got gravely ill after attending there and I know others did too," Mr Corcoran told MPs. There were problems with mites and faeces falling down when he toured the site, he said."Some of the buildings I went into were just horrendous. I mean, the smell," he said.
"You're almost throwing up just going into the places people were living.  It's just completely unacceptable. "The mice, which first arrived at year ago, chewed through internal wiring and ceiling panels.
Mr Corcoran said the problems were most acute in the staff areas, and the situation "wasn't so bad" in the inmates' cells. Nevertheless, Corrective Services Minister Anthony Roberts said removing the inmates and most of the staff was the best solution so remediation works could be done urgently. Asked how he could lose a maximum-security prison to mice, Mr Roberts replied: "We build prisons to keep people in. "Macquarie Correctional Centre, just one kilometre away from the Wellington prison, had been largely unaffected by the plague, the hearing heard.
Despite a lull over the winter, Australia’s mouse plague never ended – and now it’s threatening new areas of the country. Large numbers of mice continue to plague rural Australian communities as farmers fear yet another crop will be ruined.

Australia's bushfire crisis drew worldwide attention in 2019, but it wasn’t the only extreme weather event to plague the nation in recent months.

Drought, dust storms, fires and floods are normal during an Australian summer. But the severity and duration of these events made the last couple of years one of the worst people can remember.

Rats! Not mice. Paradise (FL) has them increasingly taking over vehicles and homes too. A sign of the times no doubt!

I would like to share breaking American news with you now. Courts have ruled a "stay" on Bidens vaccine mandate, no go for said start dates of Dec. & Jan. so far anyway. The judge ruled it can not go in to effect as written and further court hearings are requested. I'm sure news will be picking it up through out the day.
So, hallelujah there still is a judge who knows U.S. constitutional law. Anything can happen next but to see this said among all the other tyrannical BS this government calls law, it is hope. Hope it sticks. But sadly all healthcare facilities have already been firing staff and are now running too low to help people in everything from hospitals to doctor visits. And think about all the people who caved to the needle already to keep their pay checks coming in when if not for threats they never would have taken the jab.

The plans are in play for this to be regardless of this seemingly stopping it for now, so sadly I think corruption will overwhelm the courts and tyranny will continue, hope to be wrong though. Skin patches are planned, funded, being made and have been in the works for a t least 3 years, usually means laws wont stop it. Quantum tatoo is a vaccine delivery skin patch like product being created today and yesterday, that is the finale to "the mark", how can anyone say otherwise if you cant buy or sell without the shot and patch!? To replace vac cards doomed to fail of course. Google search to see for yourselves.
One point to make that you may not realize. These vacs are synthetic gmo ingredients. USA laws written say patent owners have 100% ownership on anything that is a gmo lab creation, like crops for instance. So, if this part is considered with regards to these covid vacs, then patent owners like evil Gates and his comrades own your body if you take these shots. Did you know this? It's why I doubt law will prevail. If you are vaccinated now with c-19 vaccine, your body is changing to genetically modified known as gmo. They own your body.
I say this because it is true for one, and also because freedom is to the body as well as other things. If the government can force by law what you must put in your body, then you are not free. It's that simple yet that intricate. It means a gmo body is already lawfully owned by the government. More reason to resist the shot!. As long as you are not genetically modified you are the owner of your body. It's really about so much more then most people realize.