Unliveable! Historic! A foot of rain in just 6 hours devastates the North East of the US: Louisiana suffers energy-sapping heat and incredible humidity as Ida leaves more than a million people without water and power as the West Coast burns on!

The remnants of Ida slammed the tri-state Wednesday night with fatal results, producing historic rainfall amounts that left millions under a flash flooding emergency and triggering multiple tornado warnings throughout the night — including for New York City. Most of New York City is under a Flash Flood Emergency until 11:30 p.m. -- with the National Weather Service urging the 9.1 million at-risk people to seek higher ground.
North East

Amid the downpour, the service said on Twitter, “this particular warning for NYC is the second time we’ve ever issued a Flash Flood Emergency (It’s the first one for NYC). The first time we’ve issued a Flash Flood Emergency was for Northeast New Jersey an hour ago.”New York mayor Bill de Blasio declared a state of emergency shortly before midnight on Wednesday, saying “We’re enduring a historic weather event tonight with record-breaking rain across the city, brutal flooding and dangerous conditions on our roads.

De Blasio declared a state of emergency at about 11:30pm and said thousands of New Yorkers had lost power. The NWS recorded 3.15 inches of rain in Central Park in one hour, far surpassing the 1.94 inches that fell in one hour during Tropical Storm Henri on the night of 22 August, which was believed at the time to be the most ever recorded in the park. Heavy winds, drenching rains, and at least one tornado also battered Pennsylvania and New Jersey, collapsing the roof of a US Postal Service building and threatening to overrun a dam on the way.

The NWS confirmed at least one tornado and social media posts showed homes reduced to rubble in Mullica Hill, a southern New Jersey county just outside Philadelphia. The Port Authority of New York and New Jersey, which operates Newark Liberty International Airport, tweeted at 10:30pm that all flights were suspended and all parking lots were closed due to severe flooding. All train service to the airport also was suspended.

It was yet another record-breaking storm to hit Louisiana, an all too common occurrence recently but the problem now is the energy-sapping heat made even more unbearable from the incredible humidity in the area. With no prospect of electricity or running water for more than a million people and reports of fuel shortages hindering the rescue services, we can only hope the weather will improve.

(Reuters) - Storm damage from Ida astounded officials on Wednesday three days after the powerful hurricane pounded southern Louisiana, as reconnaissance flights revealed entire communities devastated by winds and floods. With President Joe Biden due to survey the destruction for himself on Friday, Louisiana Governor John Bel Edwards issued a plea for emergency supplies to assist a million homes and businesses without power, as well as 600,000 people without water.

The number of fatalities rose to six on Wednesday following the confirmed deaths of two electricity workers in Alabama who had been repairing the power grid, according to an executive with utility provider Pike Electric. Thousands more were in misery, with countless homes destroyed and towns flooded, evoking memories of Hurricane Katrina, which killed some 1,800 and nearly destroyed New Orleans 16 years ago. 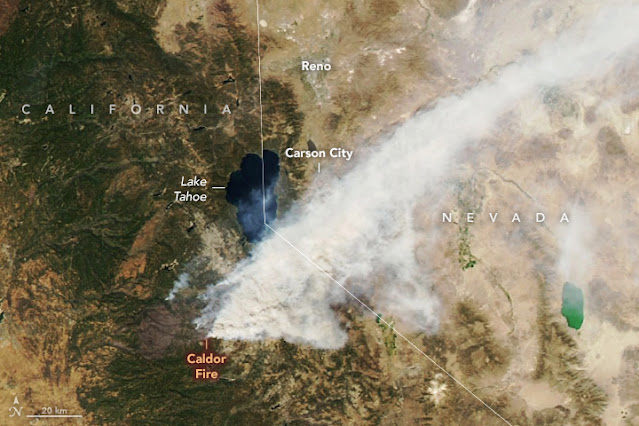 As August 2021 came to an end, 42,647 fires had scorched 4,879,574 acres across the United States in 2021—close to the ten-year average for the first eight months of a year, according to statistics from the National Interagency Fire Center. But among the 83 fires still actively burning on August 31, some were especially fierce; two of them had crossed the crest of the Sierra Nevada for the first time in recent record-keeping.

The Calder Fire which has been burning since mid-August is still threatening homes and businesses near Lake Tahoe with bone dry conditions and strong winds not letting up anytime soon. 22,000 residents were ordered to leave, South Lake Tahoe earlier this week when flames entered the city limits, however, firefighters managed to save the town.

The Knob Fire is estimated at 2,066 acres and 34% contained. Fire crews had some success with the Knob Fire today, though it did push hard at Butterfly Creek towards the SR Highway 299. A dozer line is being constructed up a ridge from Butterfly Creek to Bloody Nose Creek. To the east of South Fork Trinity River, crews were successful with containing the head of the fire. To the west, crews are constructing a containment line up the FS Road 6N13 Road in the direction of Brushy Mountain, then back to Friday Ridge.

The Monument fire is estimated at 174,759 acres and 29% contained. Monument Fire North Zone: Due to an inversion, fire activity was minimal over the area. There are no concerns with completed fire lines from Corral Bottoms to Burnt Ranch. Masticators continue to work in the New River area improving contingency lines. The fire continues to be active on Big Mountain and it is being monitored.

The McCash Fire was located on July 31, 2021, around 7:00 pm.  The fire is located in timber with an understory of tall grass and brush.  The fire is burning in rugged, steep terrain in an area with limited roads and within the Marble Mountain Wilderness.  The nearest town is Somes Bar, CA (Siskiyou County). Full suppression tactics of confine and contain are being used to fight the fire.

The Dixie Fire started on July 13th. The fire is burning on the Plumas National Forest, Lassen National Forest, Lassen Volcanic National Park, and in five counties: Butte, Lassen, Plumas, Shasta, and Tehama. The Fly Fire started on July 22nd and was managed under the Dixie Fire East Zone command as the two fires eventually merged into one. The drought, combined with dry, hot weather and strong winds, has resulted in very active fire behavior. To maximize resources and efficiency, the Dixie Fire is being managed in two cooperative zones: West and East. The fire has resulted in structure damage, evacuation orders, and evacuation warnings. Many roads are closed, as are the national forests. Air quality in the nearby communities has been unhealthy due to smoke.

The Twentyfive Mile Fire was first reported at 3:45 p.m. on August 15, 2021. The fire was initially burning on the south shore of Lake Chelan near Twentyfive Mile Creek and has expanded south and west of the area. The fire is under the joint jurisdiction of the Okanogan-Wenatchee National Forest, Washington Department of Natural Resources, Bureau of Land Management, and Chelan County Fire District 7.

A lightning storm blanketed the northern Cascade Mountain Range on the evening of August 3 igniting a fire in the Schneider Springs area of the Naches Ranger District approximately 20 miles northwest of Naches, WA.  The fire grew quickly in the next several days in record hot and dry conditions, burning in heavy timber, standing dead trees, and very steep terrain that was difficult for ground resources to access.

The fire is now burning on the Okanogan-Wenatchee National Forest and lands managed by the Washington Department of Natural Resources. There is a temporary area closure in place for public and state lands in and around the fire area. Pacific Northwest Incident Management Team 2 assumed command of the Schneider Springs Fire on August 20. The Schneider Springs Fire is being managed under a full suppression strategy. However, due to a large number of fires nationally, there are a limited number of firefighting resources.

And here could be the next! Tropical Storm Larry forms in the eastern tropical Atlantic, watch this space...