Impressive and not to be outdone by this year's record-breaking major quake toll! Volcano activity is just as impressive. Mount Etna dumps a year's waste (ash) in 45 minutes: Mnt Sinabung, Indonesia, San Cristobal Nicaragua, Guatemalan Pacaya volcano all blowing: 49 volcanoes around the world erupting or showing signs of activity! 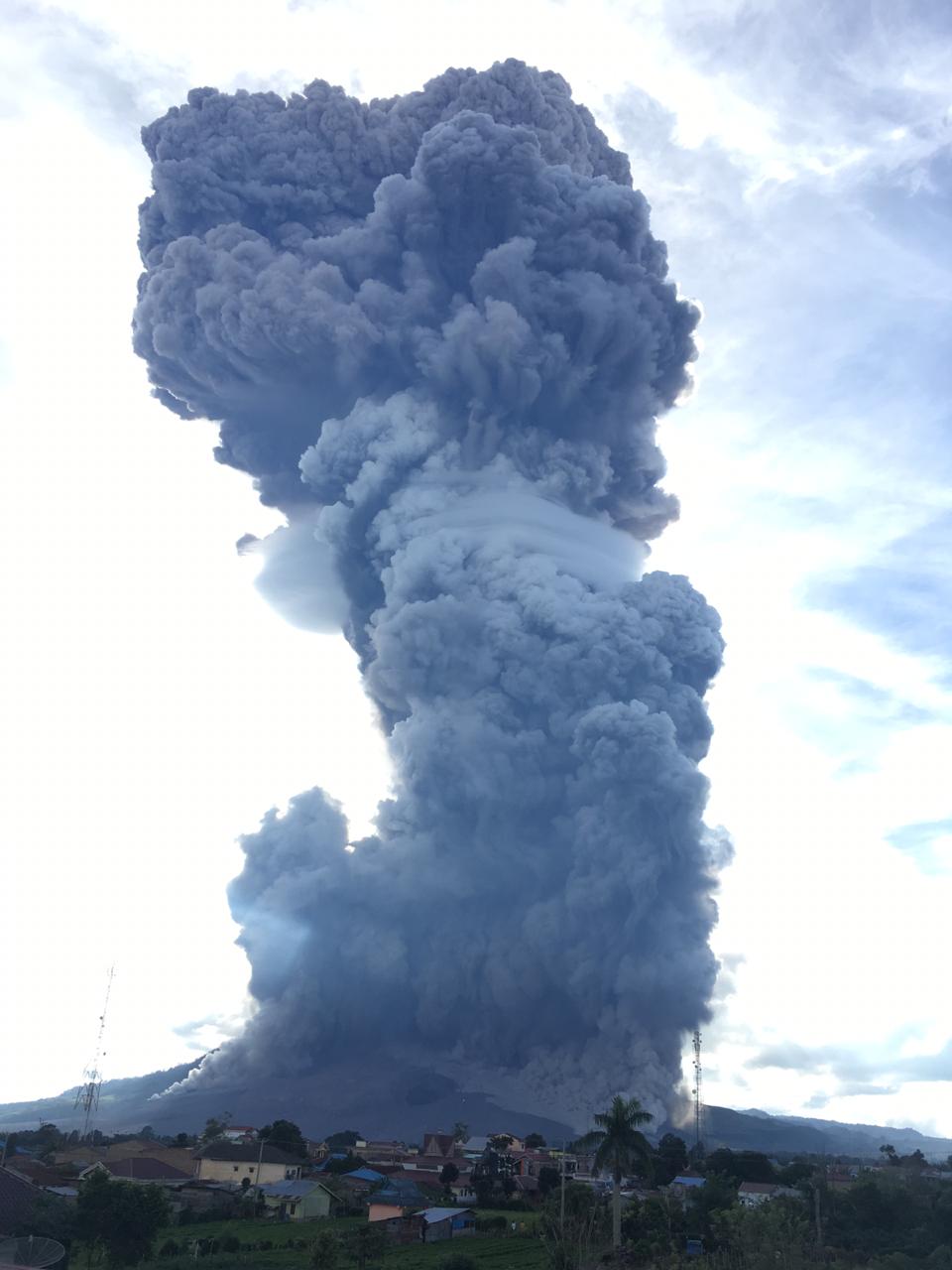 A new eruption of the Sinabung volcano in Indonesia:

The volcano on the island of Sumatra projected smoke and ash up to 1,000 meters high, which travelled up to 3 km to the southeast, according to the Indonesian Volcanology and Geological Hazard Mitigation Center. Villagers were advised to stay at least 3km away from the crater. The alert is maintained at the second-highest level as authorities are closely monitoring the volcano after sensors have detected increased activity in recent weeks. The 2,600-meter mountain has been showing intense activity since last year. In recent years, around 30,000 people have been forced to leave their homes in the area around Sinabung. Sinabung is among more than 120 active volcanoes in Indonesia, the country is subject to earthquake shocks due to its location on the Pacific "Belt of Fire", an arc of volcanoes and fault lines that surround the Pacific Basin.

Nicaragua. The violent eruption of the San Cristobal volcano

The town of Chinandega, Nicaragua, was under a cloud of ash Tuesday afternoon after the eruption of the San Cristobal volcano. The San Cristobal volcano, in northwest Nicaragua, erupted on Tuesday with violent explosions projecting ash and toxic gases that reached the city of Chinandega, in the northwest of the country. The volcano, which peaks at 1,745 mothers, was rocked by a sudden explosion, raising a column of ash and smoke blown by the wind towards Chinandega, located about 17 km away, testified Carol Altamirano, a journalist who lives in the city. The town of Grecia and surrounding villages have also been affected, according to the NGO Humboldt Environmental Center. The volcano was rocked by four explosions on Tuesday starting at 1:25 p.m. local (19:25 GMT), according to the Humboldt Center. Ouest France

Accompanied by strong lava emission and lava flows approximately 1.3 km (0.8 miles) in length. Authorities warned there is an increased probability of new lava flows generated on other flanks. The volcano exhibited incremental eruptive pulses with constant moderate to strong explosions since February 5, 2021, expelling ballistic and volcanic material 500 to 600 m (1 640 - 2 000 feet) above the Mackenney crater. The ash has spread to the SW, S, and SE up to 30 km (19 miles) from the volcano, with fine ash reported in the communities of Pacaya, Finca El Chupadero, Finca La Laguna, and others in the sector. The Pacaya National Park is still closed and access to the areas of active lava flows on the southern flank of the volcano is prohibited.

A fall of ash of this magnitude many do not even remember. A few days after the eruption of Etna on Sunday morning, the foothills have to deal with the extraordinary cleaning of streets and roofs. Among the areas most affected by the emergency is Giarre with its nearly 28,000 residents. "There are six kilograms of ash for every square meter - explains the mayor Angelo D'Anna to fattoquotidiano.it - ​​According to our calculations, in about 45 minutes a quantity of material comparable to the waste collection we do in a year has fallen ". To clean the main roads, the administration had to resort to extremely urgent tasks, relying on various private companies that provide men and vehicles, in particular sweepers and trucks. The ash ends up in collection areas from where it must then be disposed of as special waste. For the moment, the schools remain closed waiting for the cleaning work to be completed: "I have about 8000 pupils who are at home - complains the mayor - But if the minimum safety conditions are not created, I cannot allow the activities to resume. didactic ".

On Sunday there was also an inspection by the regional civil protection and by the regional president Nello Musumeci who declared a state of crisis and asked Rome for an emergency. However, the mayors have not yet received any financial aid and have been forced to commit municipal funds in the budget despite the fact that the eruption began in mid-February and was often accompanied by falling ash. Ill Fatto

Impressive and not to be outdone by this year's record-breaking major quake toll! Volcano eruptions and activity has been just as impressive.