Beast From The East! Storm Filomena battered Spain on Thursday bringing chaos along with heavy snow and torrential rain in the south: The lowest ever temperature in Spain was recorded in Leon province where the mercury dropped to - 35.8ºC, (-34 deg F) 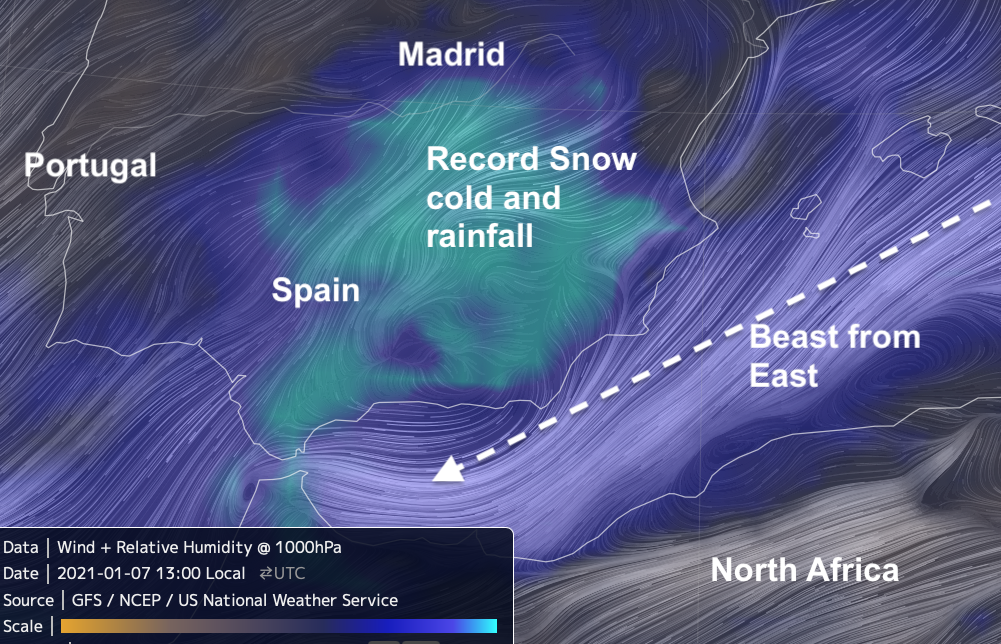 Earthwindmap
Storm Filomena swept across the peninsula on Thursday bringing heavy snow to much central and northern Spain and torrential rain in the south. Andalusia experienced torrential rain with up to 100 litres per square metre recorded in the province of Cadiz while strong winds grounded flights in the Canary Islands. Snow and ice caused problems across much of mainland Spain with 167 roads closed by lunchtime on Thursday as motorists were warned to stay off the roads and those who had to make essential journeys were advised to carry snow chains.
Spain's meteorological agency issued weather alerts across 27 provinces on Thursday, extending the warnings across northern Spain on Friday and Saturday. The snow level reached between 300 and 500 metres above sea level across northern and central Spain while inland areas of the Valencia region saw snowfall between 400 and 600 metres above sea level.

The lowest ever temperature in Spain was recorded in the Picos de Europe in Leon province where the mercury dropped to minus 35.8ºC, (-34 deg F) beating the previous record of -34.1ºC registered in the Pyrenees the day before. In Madrid, the first snowflakes began falling mid-morning with predictions that it would continue over the next few days bringing up to 20cm of snow by Saturday. Madrid mayor warned people to only leave their home if they had to.

Spain's national rail operator Renfe warned that its high-speed trains would be travelling at reduced speeds and that travellers should expect delays and cancellations. Meanwhile, air passengers were warned to expect delays and cancellations and told to check with airline operators before heading to the airport. Flights to and from the Canary Islands were affected by strong winds with at least eight flights cancelled.
Extreme Weather 2021
Front Page
at January 08, 2021