Category 5 Monster! Cyclone Yasa has intensified to a top-of-the-scale Category Five storm, with devastating gusts of up to 280 kilometres per hour (174 miles per hour) and is on track to hit Fiji late Thursday: Around two-thirds of the island nation's population of 900,000 are in its path. 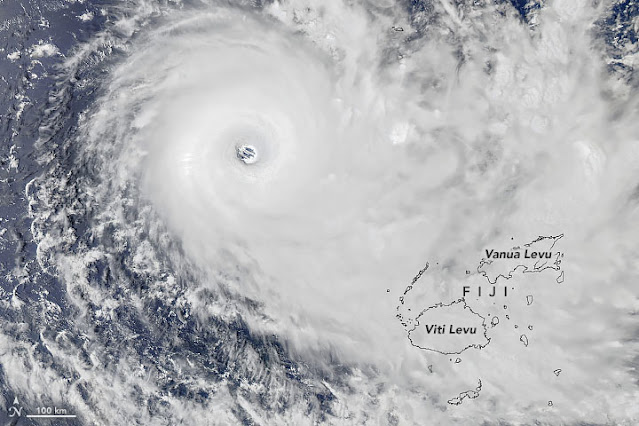 Fijians living in the path of an approaching super cyclone were told to hunker down at home or flee to emergency shelters immediately on Wednesday, as authorities warned the storm has the potential to uproot buildings and cause mass destruction. The Fiji Meteorological Service said Cyclone Yasa had intensified to a top-of-the-scale Category Five storm, with devastating gusts of up to 280 kilometres per hour (174 miles per hour). It was on track to hit Fiji late Thursday and the National Disaster Management Office said around two-thirds of the island nation's population of 900,000 are in its path.

In the capital Suva on Wednesday, residents tried their best to board-up windows and storefronts, while others lugged bags filled with vital provisions through already flooded streets. National Disaster Management Office director Vasiti Soko urged anyone who doubted their home's structural integrity to prioritise survival over protecting their property and escape right away. "If you need to move to an evacuation centre, we are pleading that you move before it gets dark," Soko said. "If you know that your house cannot survive strong winds, let alone the cat five cyclone that is on the way, please take yourselves, your children and your valuables to the evacuation centre."

Soko said Cyclone Yasa was likely to have a larger impact than Cyclone Harold in April this year, another Category Five storm that gouged a trail of destruction across the Solomon Islands, Vanuatu, Fiji and Tonga.

Military on standby. Category Five cyclones were once rare but have become more common in recent years, with Fijian Prime Minister Frank Bainimarama among those blaming the trend on climate change. "We can see the eye (of Cyclone Yasa) and the area that's of concern-it's not just part of Fiji like Harold, it's the whole of Fiji," Soko said. "It's strong enough to uproot trees. It's strong enough to uproot buildings that are not well secured. It can also create a lot of flying debris." She added that authorities were considering a curfew and movement restrictions, with Fiji's military on standby if needed. Schools have already been closed so they can be converted to evacuation centres.

Aid agencies such as the Red Cross are gearing up for a major disaster relief effort, with the focus on maintaining basic services and minimising longer-term social impacts. "Disasters can strike at any time and we know that knowledge and preparation are critical for communities as they prepare," Fiji Red Cross Director-General Ilisapeci Rokotunidau said. The most powerful storm to ever hit Fiji was Cyclone Winston in February 2016, which killed 44 people, destroyed tens of thousands of homes and caused an estimated US$1 billion in damage. The Red Cross said it had re-positioned supplies across the Pacific in anticipation of a busy cyclone season. In some good news for the region, another tropical cyclone, Zazu, took a sharp turn to the southeast late Tuesday and was no longer threatening the Tongan capital Nuku'alofa. The two storms are the first to form in the current cyclone season, which runs until May next year.