Our Sun awakes from a deep slumber: Giant sunspots AR2781 produced a C5-class solar flare kicking off Solar Cycle 25: Solar Cycle 24 had the 4th-smallest intensity since records began in 1755 it was also the weakest cycle in 100 years. 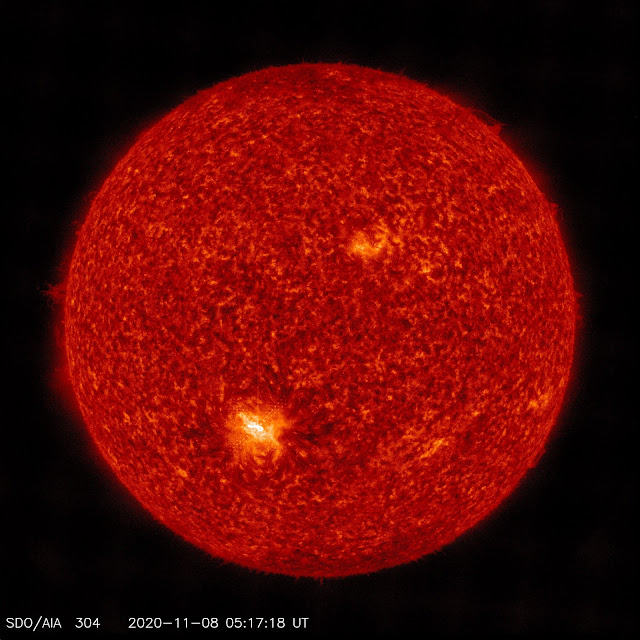 On September 15, 2020, NASA confirmed Solar Cycle 25 had officially begun  - The solar minimum between Solar Cycle 24 and 25 - the period when the sun is least active - happened in December 2019, when the 13-month smoothed sunspot number fell to 1.8, according to the Solar Cycle 25 Prediction Panel, co-chaired by NOAA and NASA. We are now in Solar Cycle 25 with peak sunspot activity expected in 2025, the panel said.

Yesterday, Nov. 8th (0518 UT), our sun became active as giant sunspots AR2781 produced a C5-class solar flare, shown above in a photo from NASA's Solar Dynamics Observatory: A pulse of X-rays and UV radiation ionized the top of Earth's atmosphere, causing a brief shortwave radio blackout over Australia and the Indian Ocean.
With speeds reaching 800 km per second solar wind batters the earth's magnetosphere constantly: It is a theory The Big Wobble has championed for years, solar activity reacting with the earth's magnetosphere causes large earthquakes worldwide claims a new paper
Mariners, aviators, and ham radio operators in the region may have noticed unusual propagation at frequencies below 10 MHz. The entire episode lasted less than 20 minutes. Stronger eruptions are possible. Sunspot AR2781 has a "beta-gamma" magnetic field that harbours energy for M-class flares, 10 times more intense than a C-flare. NOAA forecasters say there is a 15% chance of such an eruption on Nov. 9th. According to Spaceweather.com 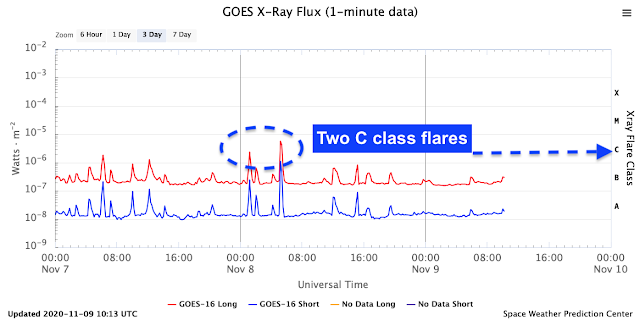 Solar Cycle 24 was average in length, at 11 years, and had the 4th-smallest intensity since regular record-keeping began with Solar Cycle 1 in 1755. It was also the weakest cycle in 100 years. Solar maximum occurred in April 2014 with sunspots peaking at 114 for the solar cycle, well below average, which is 179.

"Astronomers are so sure of the 10th planet they think there is nothing left to do but to name it." Ray T. Reynolds, NASA (NASA press release, 1992). NASA has nicknamed it "Planet Nine," could have a mass about 10 times that of Earth and orbit about 20 times farther from the Sun on average than Neptune.

Solar Cycle 24’s progression was unusual. The Sun’s Northern Hemisphere led the sunspot cycle, peaking over two years ahead of the Southern Hemisphere sunspot peak. This resulted in solar maximum having fewer sunspots than if the two hemispheres were in phase.