Category 4 Monster Hurricane Delta to deal devastating blow to Mexico, the biggest to hit the area in 15 years before heading off toward the coasts of Lousiana and Mississippi, beginning this Friday: life-threatening storm surge and potentially catastrophic wind damage are expected 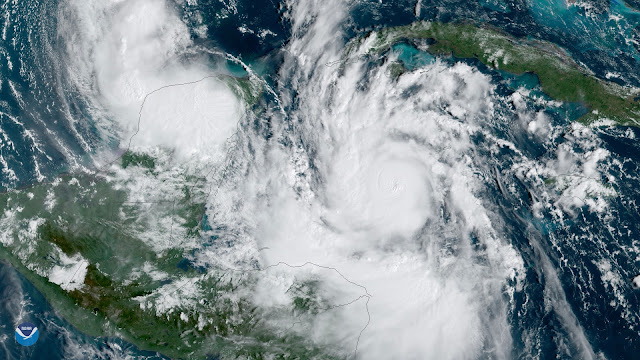 The GOES-East satellite has been tracking what is now Hurricane Delta as it rapidly intensified from a tropical storm over the Caribbean Sea last night. As of 11:20 a.m. ET on Oct. 6, 2020, the storm’s maximum sustained wind speeds reached 130 mph, making it a major Category-4 hurricane on the Saffir-Simpson Hurricane Wind Scale, and it was expected to continue strengthening. According to the National Hurricane Center, an “extremely dangerous storm surge and hurricane conditions are expected over portions of the northern Yucatan Peninsula beginning tonight.”

According to the National Hurricane Centre, life-threatening storm surge and potentially catastrophic wind damage are expected within areas of the northern Yucatan Peninsula of Mexico beginning tonight. All preparations to protect life and property should be rushed to completion.

There is an increasing likelihood of life-threatening storm surge and dangerous hurricane-force winds, especially along the coasts of Lousiana and Mississippi, beginning this Friday. Residents in these areas should ensure they have their hurricane plan in place and follow the advice given by local officials. Storm surge and hurricane watches will likely be issued for portions of the Gulf Coast later today.