I have just received an email from my old friend Carol Rosin who lives in Oregon which she has described as a "war-zone." 600,000 Oregonians evacuated: Updates on record-busting fires in Washington State, California and Colorado 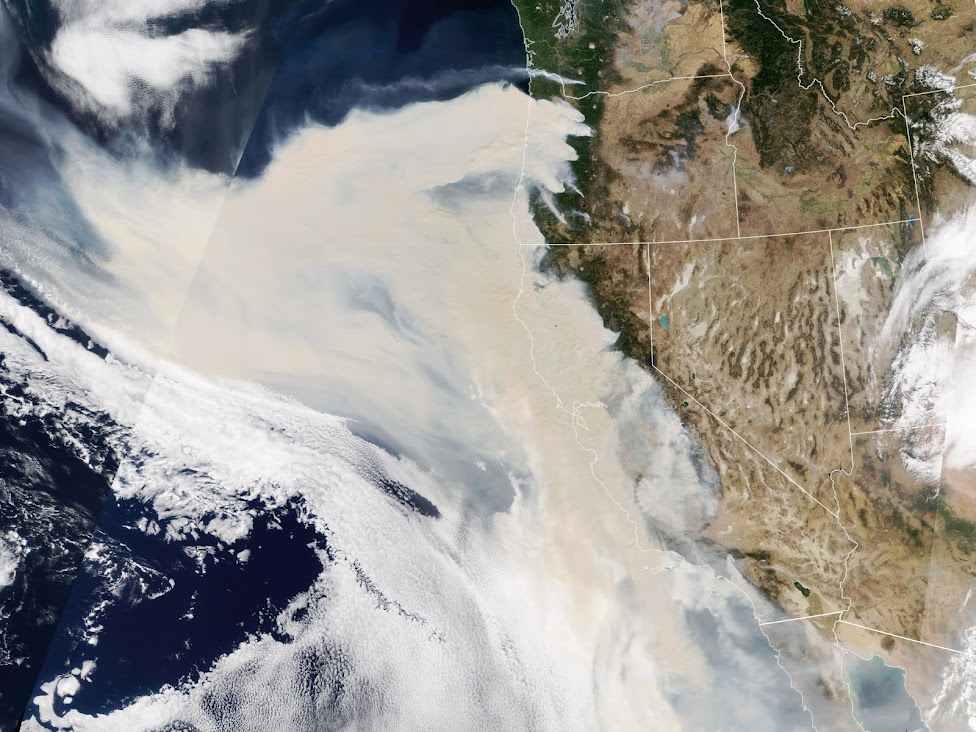 Credit (MODIS) on NASA’s Terra satellite captured this natural-colour image of thick smoke streaming from a line of intense fires in Oregon and California. Many communities in the region are facing extremely poor and sometimes hazardous air quality.
I have just received an email from my old friend Carol Rosin who lives in Oregon which she has described as a "war-zone." Thanks for the live update Carol and keep safe my friend;

Whole towns of Talent and Phoenix are almost all destroyed…burned to the ground with not much still standing…minutes. away from us in Jacksonville, Oregon. Wildfires are burning out of control all around. We are in a red evacuation alert. But so far OK. Electricity and water back on. Hotels filled so people sleeping In their cars In parking lots everywhere including in a parking lot next to our yard in front of a veterinarian office…people who have already evacuated their homes. Over a half-million Oregonians, 600,000 to start, have already had to evacuate from their homes. Can’t fit much into our little Kia but we are in an evacuation zone hoping we won't have to leave. We’re in dense smoke with hazardous particles in bad air, so I can’t go outside. Horrifying. Places look like war zones. Why would anybody want to put weapons over all our heads? Militaries need to help all the disaster areas.   Jon and I are in a red alert evacuation zone...hoping we'll be OK.
Thanks for all you are doing.
Love Carol.

Here is the latest info from Oregon.

SALEM, Ore. Authorities in Oregon now say more than 500,000 people statewide have been forced to evacuate because of wildfires. The latest figures today come from the Oregon Office of Emergency Management. That's over 10% of the state's 4.2 million population. More than 1,400 square miles have burned this week in the state. Authorities say the wildfire activity was particularly acute this afternoon in northwestern Oregon as hot, windy conditions continued. At a news conference today, Gov. Kate Brown said there have been fatalities but the exact number is not yet known. There have been at least three reported fire deaths in the state. The Oregon Department of Corrections says it is evacuating a prison out of an abundance of caution as two large wildfires in the area appear to be merging. Authorities said they evacuated more than 1,300 adults in custody at the Coffee Creek Correctional Facility in Wilsonville, which houses mostly women. Those evacuated are being relocated and not released. Wilsonville is about 16 miles south of Portland. Earlier this week, fires triggered evacuations at three other prisons near Oregon's capital city of Salem.
Here is the latest from Washington State.
MALDEN - Wildfires have scorched nearly 937 square miles (2,426 kilometres) in Washington state this week, Gov. Jay Inslee said Thursday as he toured the devastated remains of the town of Malden. That's more than in any year in the state's history except for 2015, Inslee said, calling it "the worst few days in wildfire history for Washington state." "We've had this trauma all over Washington," Inslee said, according to KHQ-TV. "But this is the place where the whole heart of the town was torn out." Malden is a farm town set among wheat fields about 35 miles south of Spokane, Washington.
Malden Mayor Chris Ferrell said residents only had minutes to get out of town before the wind-driven flames moved in on Monday. But more than 80% of the homes in Malden were destroyed by the flames, and officials have said many people did not have insurance. Inslee repeated that this week's swarm of wildfires is the result of climate change, which he called "fundamental forces making fires so cataclysmic." The fires were driven by a dangerous combination of hot temperatures, very low humidity and very strong winds, making them very difficult to control, Inslee said. Firefighters cannot stop wildfires "if we allow climate change to make them TNT," Inslee said. "That is what we are facing." Among the largest conflagrations, the Pearl Hill Fire in Douglas County was around 272 square miles (704 square kilometres) and was 10% contained, officials said. The Cold Springs Fire in Okanogan County was 268 square miles (694 square kilometres) and 10% contained. The Whitney Road Fire near the town of Davenport was 190 square miles (492 square kilometres) and was 20% contained.
Here is the latest from California.
FRESNO, Calif. (KFSN) -- The Creek Fire was first sparked on Friday evening and has exploded to 175,893 acres as of Thursday evening with 6% containment. At least 361 structures have been damaged or destroyed, and more than 14,000 are threatened. Officials say 30,000 residents of Fresno County and 15,000 residents of Madera County have been evacuated. The fire started near the communities of Shaver Lake, Big Creek, and Huntington Lake but has quickly spread.
CAL FIRE officials say they do not expect to have the fire contained until October 15??? During a briefing on Thursday evening, officials said containment had grown to 6% and that it was the first-day firefighters were on the offence instead of the defence, calling it a 'turning point' in their fight against the flames. Earlier in the day, CAL FIRE said the Creek Fire, along with five other large wildfires currently burning in the state, have been listed as 20 of the largest wildfires in California's history.
A second air attack team was grounded due to the heavy smoke. The aircraft dropped more than 100,000 gallons of flame retardant on Wednesday, officials say. The first air attack plane flew over the fire but couldn't recommend any drops because of high pressure holding the smoke cover. Air quality forecast for Thursday is unhealthy for everyone in every county due to smoke from the Creek Fire. ABC30 meteorologist Madeline Evans said wind from the northeast will push in more smoke through the day and high pressure will keep it sitting over the Valley floor. On Thursday, the Clovis Rodeo said their grounds had reached capacity for taking in livestock and large animals. Anyone who needs to shelter large animals can bring them to the Fresno Fairgrounds. Click here for more information.
Here is the latest from Colorado.
The Cameron Peak fire on Thursday is expected to remain stable as cooler temperatures and precipitation persist over the flames. The fire - the fifth-largest in Colorado's recorded history - is still burning 102,596 acres, or 160 square miles, with 4% containment, fire officials said in a Thursday morning news release. Thursday will be slightly warmer than previous days, with a chance of light snow transitioning to rain showers in the afternoon. Warm and sunny conditions are expected to resume over the weekend, which could resume fire expansion, officials said. The snow has diminished heat in some areas of the fire, though the larger fuels are still smouldering, officials said. Fire crews plan to take advantage of the cooler weather to work on containment and prepare for the drier conditions. Closures from the fire's expansion and subsequent snowfall remain in place, including Rocky Mountain National Park's Trail Ridge Road at Rainbow Curve on the east side and Colorado River Trailhead on the west side. Old Fall River Road is also closed until further notice, officials said.
Wildfires 2020
Front Page
at September 11, 2020

The west coast has and is being subjected to a form of deforestation akin to the effects of agent orange. I wonder if this is intentional. Both patriots and foreign invaders would find this area difficult to hide in.

I think it has to do with clearing the countryside from pesky humans which will have to move into these unhealthy all-controllable and controlled 5G smart cities. This has been the plan of the UN and WEF for quite some time and I suspect they will clear the countryside across the entire US and other countries over the next few decades to fulfill their plans of better control over the people and the planet's resources. They still will have their big ranches in the then empty country sides, but without those poorer neighbors around of course.
See e.g., https://www.UNNWO.org

Climate engineering can do a lot of things; please read about it on GeoengineeringWatch.org and learn what and how they are doing this.

They've set the stage for this for decades and in the last few years it should have become clearer to people: More and more towns are being burned to the ground; the country side is being emptied (people killed, homes destroyed, livelihoods destroyed, animals and crops killed,... but that seems to be no big deal for those who want to further dominate us and this planet).

We're being distracted and kept in unfounded fear by false alarm non'pandemics' to keep us looking away from what their dominant hand is doing.

When the 'pandemic' arrived in the west, I became afraid as well, not about the never isolated or proven virus, the low mortality rates, the irrelevancy of unreliable tests etc., but about the consequences of these 'emergency measures' which have been planned for decades and which will result in the complete surveillance, and complete loss of our civil rights and individual freedoms.

"What emergency measures" you ask? That's right - they have taken down all 'emergency' hospitals they quickly built up for covid patients which never came, months ago. There is no emergency concerning covid19. But there is an emergency concerning the increasing infringements on to our civil rights. If people don't wake up soon, the 'masters' will pull it off soon, while we still have to pull off the wool they've so carefully pulled over our eyes for so long.

The signs are there, birth pangs(disease, wars & rumors of war, famine, hate between neighbors, nation against nation, increased catastrophic weather & seismic events), but the end is not yet, the end Jesus is talking about is after the 7yr tribulation, still not the end b/c God will be the overseer of the people still left on the new earth after the 7yr. tribulation, his reign will be a 1,000 years(kingdom age) while satan is bounded & then released to gather all his followers & be destroyed by Jesus in one breath of fire. Stop being blinded by satan, this world is temporary & will be purified. Ask Jesus Christ to be your savior & also ask the Holy Spirit to join your spirit & guide you through these troubled times. Amen. God bless all of us.