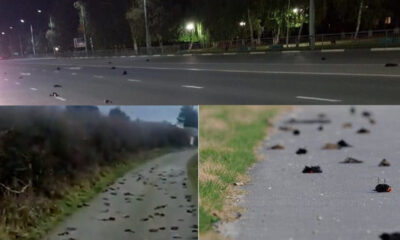 AN APOCALYPTIC scenario unfolded in a secretive nuclear city in Russia when hundreds of dead birds suddenly plummeted from the sky and lay scattered on streets. The mysterious mass die-off of crows above a secretive nuclear Russian city has sent the internet into meltdown. A social media frenzy ensued after footage emerged of dead birds suddenly falling from the sky onto the roads below in the city of Balakovo.

The bizarre incident is currently under official investigation, with some experts tying the mass death to avian flu. However, others have suggested it could be linked to the city's best-known feature - its large nuclear power plant. Footage on social media showed Russian streets littered with hundreds of birds' corpses. The local Saratov veterinary department has started an investigation into the bizarre phenomenon up the investigation.

According to the department, veterinarians visited the site to take "samples of biomaterial" in order to test for bird flu. Several locals remain sceptical, with one user noting: "Vets in the Saratov hinterland are unlikely to be competent. "We should call in specialists from Moscow, where all the best personnel go to make lots of money!"

The most popular comment on the story posted on Russian social networking site VK read: "At the beginning Chernobyl, all the birds died." In fact, the nuclear station was the site of a deadly accident in 1985, when 14 workers at the site died from human error - less than a year before the Chernobyl disaster occurred. Russia Today tweeted of the haunting scene: "It looks like Halloween came early for Balakovo, 1,000km south of Moscow, known for its large nuclear power plant. "A video posted on a Russian social networking site showed dozens of bird corpses lying in the road, and the conspiracies soon flocked in."

Locals have dismissed the bird flu explanation, instead of pointing to environmental phenomena, such as strong winds or the accidental collision of two flocks. Others blamed fireworks, air pollution, or even 5G - even though Russia does not have any 5G towers. This follows other similar apocalyptic scenes unfolding in remote Russian regions. Earlier this month, swarms of winged insects invaded a Siberian city, forming clouds in the air and swarming on the pavements. Footage available online suggests that the city has been invaded by birch aphids, commonly known as greenflies, which has apparently exploded due to an unusually warm season.

Just last week researchers were scrambling to explain why hundreds of thousands, maybe even millions, of birds, were suddenly being found dead across wide swaths of New Mexico, Colorado, Nebraska, Arizona and Texas in recent weeks - an event that could be one of the region's largest bird die-offs in recent memory.

Regardless of the reason, experts say the sudden deaths could impact bird species that are already seeing precipitous declines in population over the past 50 years as their habitat disappears and climate changes transform the ecosystem. It appears the birds were two-thirds the weight of what they should be, just skin and bones, which reminded me of another catastrophic bird die-off involving American birds late last year. Full story