Stormy Weather: Typhoon Bavi to impact China and the Koreas: Duelling tropical systems to hit the Gulf of Mexico: West coast of Mexico two depressions with a 90% chance of forming into Tropical cyclones. Another early named storm to Batter the UK 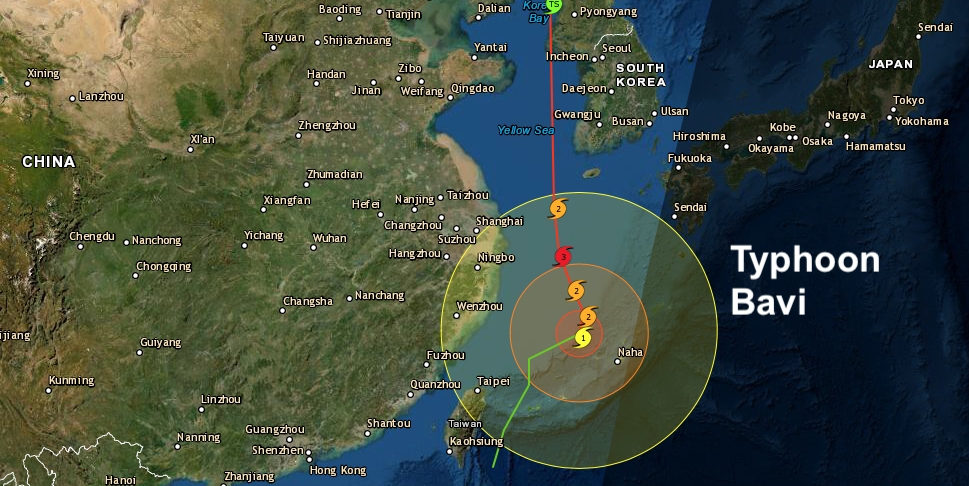 TW 09W has developed into a Typhoon Bavi and is continuing to strengthen on its current course to impact and the West coast of China and the Koreas in the coming hours.

Typhoon Bavi is located approximately south and southwest of China and South Korea and is heading northeastwards and will impact China and North and South Korea. According to the Joint Typhoon Warning Centre Typhoon Bavi is a compact system with dense, sustained convection wrapping around an irregular eye. Typhoon Bavi is continuing to intensify due to a favourable environment of low verticle wind shear and very warm sea surface temperatures which is like rocket fuel for hurricanes and typhoons.

BEIJING -- China's national observatory on Monday renewed a yellow alert for Typhoon Bavi, which is expected to bring gales to the south and southeast China reports China Daily. The typhoon, the eighth of the year, strengthened from a tropical storm early Monday morning and was observed at waters 680 km south of Jeju island, the Republic of Korea, at 5 am, with a maximum wind force of 118.8 km per hour at the centre, the National Meteorological Center said.

Meanwhile, the duelling tropical systems threatening the Gulf of Mexico will feel Marco's wrath first as Laura looms. Gale-force winds, dangerous storm surge and torrential rainfall are expected from Marco along portions of the Gulf Coast.

Tropical Storm Laura is expected to bring additional storm surge gale-force winds and torrential rainfall and will impact portions of the Gulf Coast later in the week see photo below. 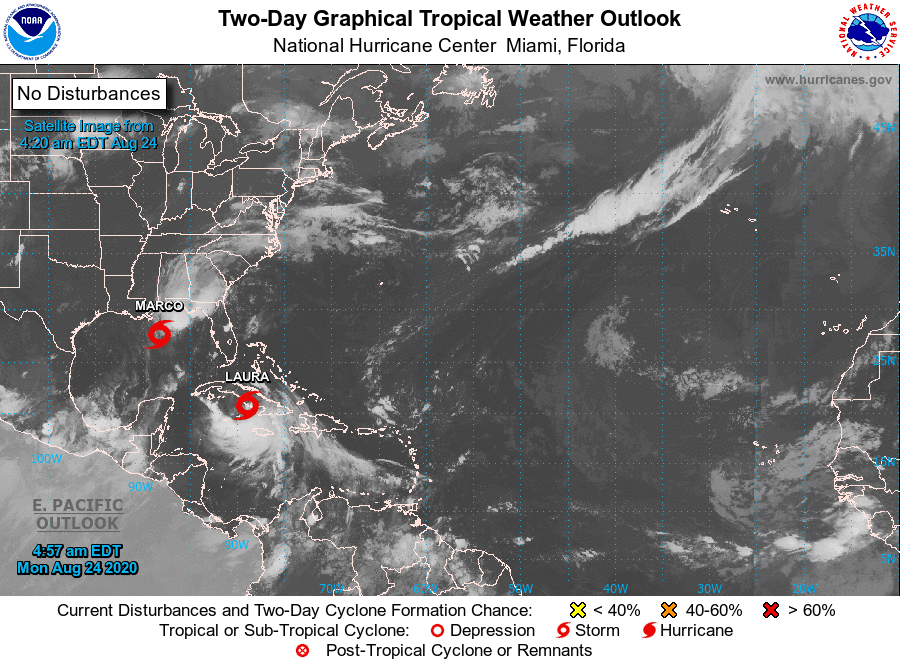 In the Eastern Pacific, two systems are forming with a 90% chance of forming into Tropical cyclones just a few days after Hurricane Genevieve caused devastation in the area, see below. 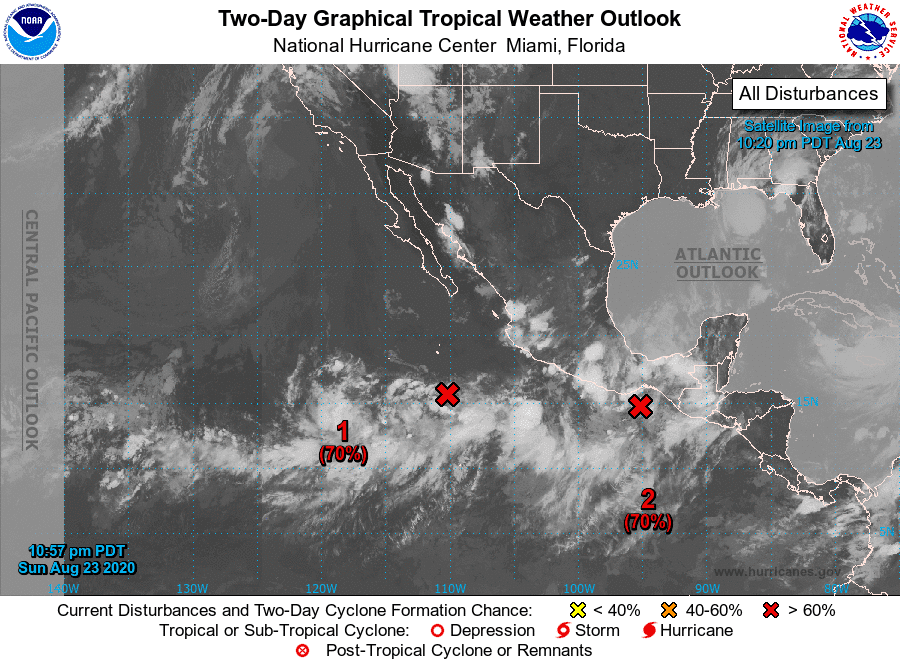 Meanwhile, Storm Francis will be the second named storm in just a few days to bring strong winds and heavy rain to Ireland and the UK after being battered by the early storm Ellen last week. Wind and rain warnings are in force for Tuesday as another very early named storm impacts the UK. A deep area of low pressure will cross the UK from Monday night, bringing wind gusts of 60 mph and potentially 70 mph in exposed western locations and also heavy rain for many. A yellow wind warning is in force for the whole of Wales and most of England until midday on Wednesday. Whilst not exceptional, winds this strong are unusual for August and they will be accompanied by some heavy rain in places, with possible transport disruption and impacts on outdoor activities. The rain is expected to be heaviest in Northern Ireland and south-west Scotland where 60-90 mm in total could fall as the storm moves from west to east. Chief Meteorologist Andy Page, said “The UK is in for another unseasonably wet and windy spell with Storm Francis arriving on Tuesday.

A number of severe weather warnings have been issued and these warnings can be updated regularly so please keep up to date with the latest Met Office forecast.” Storm Francis will clear to the East of the UK by Wednesday lunchtime, see Earthwindmap below. 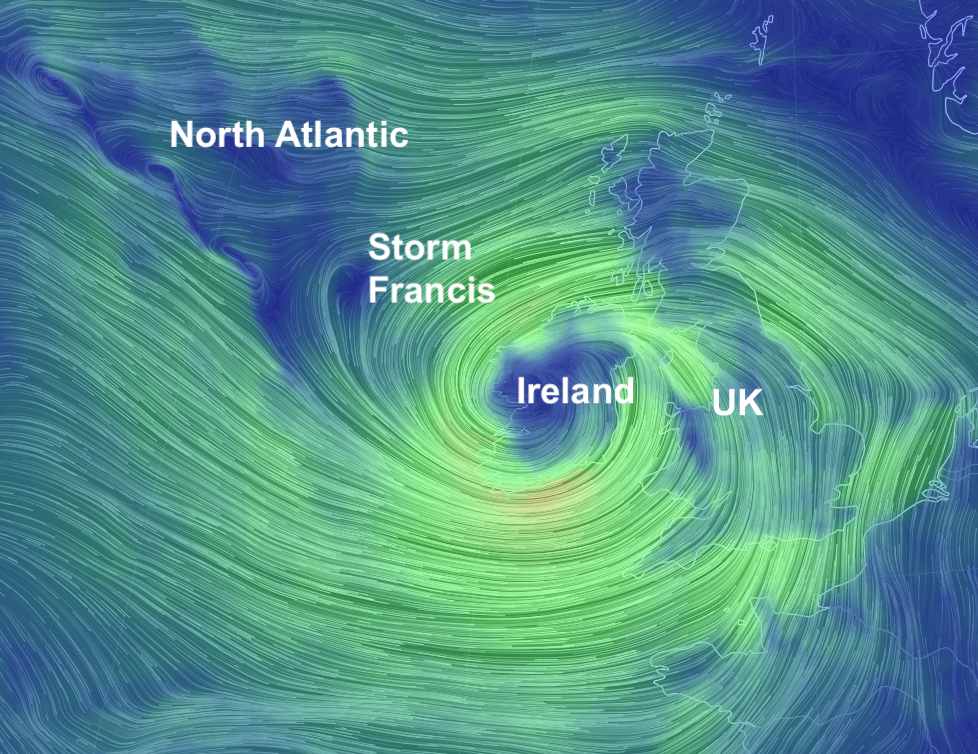