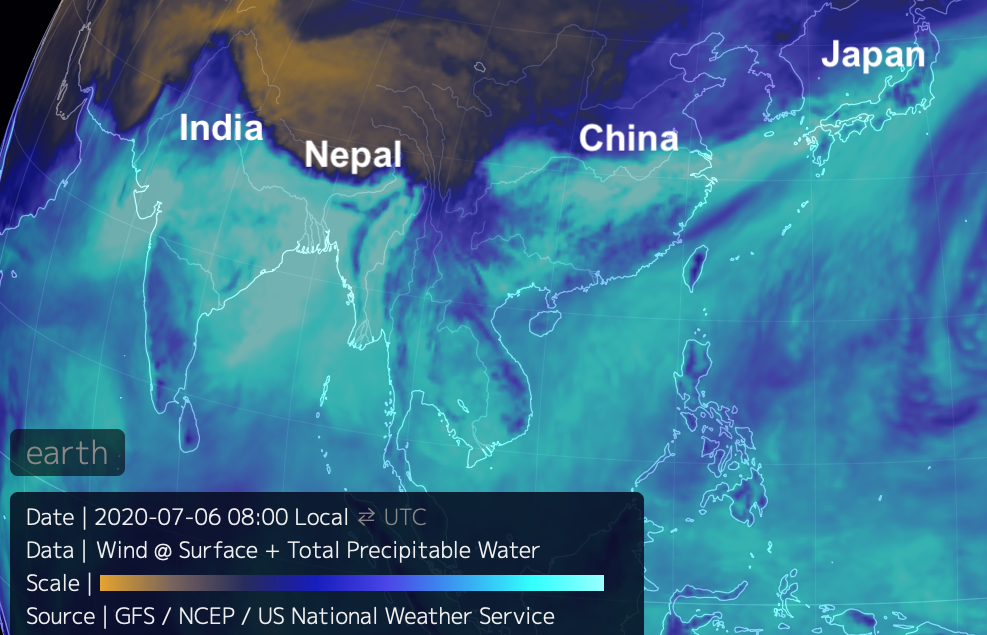 Incredible amounts of rainfall have affected untold millions of people from Africa to Japan since early June. Earthwindmap.

Incredible amounts of rainfall have affected untold millions of people, displaced hundreds of thousands and killed hundreds after torrential rainfall swamped Asia from early June to the middle of July. The deluge continues, stretching thousands of miles torrential downpours have been dumping incredible amounts of rainfall in countries from Africa across Arabia, Indo Pakistan, Myanmar, China and Japan since early June and in some areas, the rains are increasing.

Flooding in central and eastern provinces of China has worsened over the last few days, with over 14 million people affected across the worst-hit provinces of Hubei, Hunan, Jiangxi, Anhui and Zhejiang. Floodwaters first hit Sichuan, Guizhou and Chongqing in the southwest and Hubei in central China in late June. High river flows have since moved eastwards along the Yangtze river basin. According to China’s Ministry of Water Resources, rivers are above danger levels in over 80 locations. Recent heavy rainfall in the region has swollen rivers and lakes further, as well as causing flash flooding and landslides. Wide areas of eastern China saw between 400 mm and 600 mm of rain in the first 10 days of July, according to figures from China’s Meteorological Agency (CMA). Floodlist

Heavy rains triggered flash floods and landslides that killed at least 23 people and displaced thousands in western Nepal, officials said on Saturday. Nine people were killed and more than 30 were missing in Myagdi district, 200 km (125 miles) northwest of the capital Kathmandu, where several houses were destroyed on Friday, district administrator Gyan Nath Dhakal said. “The toll is expected to increase as rescuers had just reached the remote site to look for victims,” Dhakal said, adding that 50 people had been plucked to safety using helicopters. In neighbouring Kaski district, seven people were killed, said a second government official in the tourist town of Pokhara. Reuters

Mongolia‘s National Emergency Management Agency (NEMA) reports that 8 people died in flash floods in several parts of the country in the last few days. More heavy rain is expected. Five people died in a flash flood on 03 July 2020 in Bayandalai district (sum/soum) of Ömnögovi Province in the south of the country. On the same day, three people were killed while crossing a river on a motorcycle Erdenetsagaan, Sükhbaatar Province (aimag) in eastern Mongolia. NEMA also reported 2,360 homes were flooded in Zuunmod in Töv Province (209 homes flooded), parts of Khövsgöl Province (253) including Murun, and Kherlen in Khentii Province (1,971). Flooding caused damage to livestock, with 7,000 animals killed in the flooding including 5,000 in Töv. This is the second spate of flooding in the country in recent weeks. Two people died and homes were damaged in Töv and Govisümber Provinces after flooding struck on 21 June. Full story

According to disaster management authorities, over 1 million people across 13 districts have been affected by flooding in Bangladesh since late June. Flooding hit several northern districts of the country in late June after heavy rain in the country and in river catchments in neighbouring India. Jamalpur, Kurigram and Gaibandha districts were the worst affected, with some flash flooding also reported in Sylhet and Sunamganj districts. Since then flooding has been reported in a further 8 districts. According to a report by Network for Information, Response And Preparedness Activities on Disaster (NIRAPAD) of 04 July, a total of 1,012,775 people have been affected and 221,158 households marooned. The affected districts include Lalmonirhat, Kurigram, Gaibandha, Nilphamari, Rangpur, Sunamganj, Sirajganj, Bogura, Jamalpur, Sylhet, Tangail, Rajbari and Madaripur. Full story

India‘s southwesterly monsoon has brought heavy rain to western parts of the country, causing widespread disruption and flooding roads and buildings. Two fatalities were reported in the state of Gujarat and 2 in Karnataka. Full story

In Pakistan Stormy weather and heavy rain caused havoc in the city of Karachi. At least 6 people have died in rain-related incidents. Pakistan Meteorological Department (PMD) reported 43 mm of rain in Saddar, Karachi, on 07 July. PAF Faisal Base recorded 26mm of rain and Nazimabad 22mm.
Myanmar

A landslide caused by monsoon rains in Myanmar killed no less than 113 people, the country's emergency services said on Thursday. Earlier in the day, the Xinhua news agency reported a death toll of 96. The landslide came at about 8 a.m. local time (1:30 GMT) at a jade mine near the Hpakant township, located in the Kachin state. The actual number of casualties is likely to be much larger, as the incident occurred during working hours, meaning that hundreds of people could be buried at the mining site. "The latest information on the landslide in Hpakant:113 dead. The rescue works continue," the country's fire department wrote on Facebook. Myanmar's landscape is known for being prone to landslides, especially during rainy seasons. TBW

This pattern is unlike anything I recall from upper level Meteorology.

Cosmic ray max= increased cloud nucleation. It's the sun. True Science is winning. It's not you or co2. Welcome to your new paradigm.

many people that you block and play the fool with will be out there committing acts of vandalism throughout the year!