Be careful: ALL LIVES MATTER: While America convulses into violent social and political upheaval and the rest of the world watches, the second wave of Covid-19 has quietly and purposely begun. 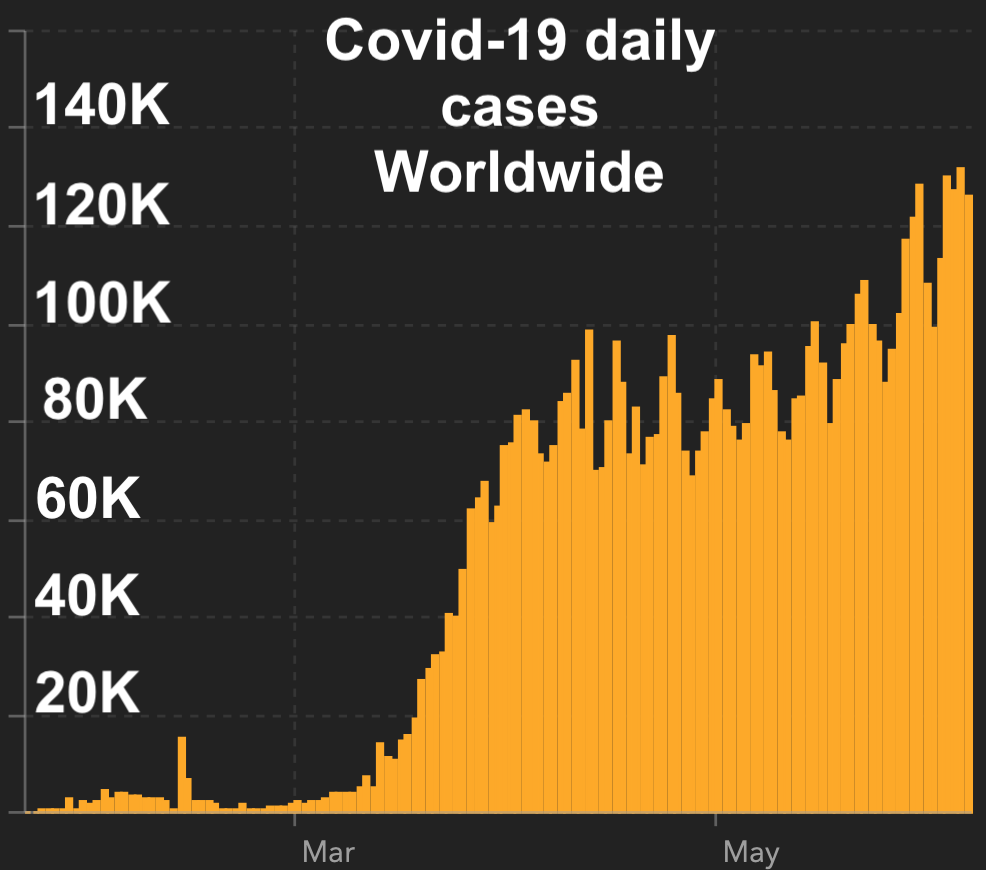 While America convulses into violent social and political upheaval and the rest of the world watches the second wave of Covid-19 has quietly and purposely begun. While America and most of the Western world spirals out of control rioting and protesting about the murder of an unarmed black man the vicious virus is hitting new levels of daily cases.

While many countries around the world appear to have the virus under control the strategy of, "let's all get back to work," is actually aiding the virus to recover and regain its hold. In Iran for instance, they had their daily number of new cases down to just 800 on the 2nd of May after it had peaked at 3,200 on the 30th of March. They hit a new peak of almost 4,000 new cases in a single day on the 4th of June. Many other countries have had similar rebounds such as Saudi Arabia, Pakistan, South Africa, Sweden, Portugal, Indonesia and Argentina to name just a few.

Meanwhile, Public Health England estimates there is TRIPLE the number of new infections shown in their data which suggests only one in 10 with the virus ends up in a hospital.

All cases of Coronavirus should also highlight whether the infected person suffers from an underlying health problem. Especially where death follows.

covid mortality numbers don't separate out whether a person died with or from Sars-Cov-2 (Birx clarified this in a video, many countries do the same).

Covid is the fast way to realize the 'Green New Deal' where winners have been picked long time ago (e.g. what businesses are essential, like Walmart and the 'health' industry, and which aren't like small shops and possibly natural health care). It has also been determined who is essential and who's not. We'll be surveilled and medicated as the controllers chose.

The process has been described 10 yrs ago in a Rockefeller paper where 'lockstep' is describing what's happening now.

The goal is what deep state groups have been working on for a long time and have expressed their New World Order publicly in recent time - search for www.unNWO.org Happytalism will replace 'capitalism' (at least for the masses, and if they will be happy with that is doubtful)

They got us on the leash and it's tightening. They panicked us, distracted us, and are panicking us again to speed up their agenda.

Those numbers quoted are meaningless unless put up against metrics that are true, such as "are they sick or do they just have the virus but their bodies are not concerned and do not react. Are any of these new cases dying? AND, if so are they dying "With" COVID-19, or "From" COVID-19.
It is apparent to me that these numbers are inflated because they have no idea who is being tested or if those test are recorded in a public square, so to speak. Hospitals may send those numbers to CDC but John Hopkins, I think not. So JH is just supposed to take the numbers given to them at face value? Apparently so, but lets not forget that none of the metrics we have been fed are correct, and those at the top have not be correct in one thing they have stated.

Gonna be lots more on a daily basis since most countries finally started testing bigtime.
So not so much new contaminations than confirmations of how many people are already carriers.

Go to www.endofbegining.com and read article To Vax or Not To Vax

Those figures are deflated not inflated, thousands are dying in care homes and at home and Covid-19 is not mentioned on their death certificate, you are miss- informed and a danger to society with your miss information

These numbers are meaningless. None of the tests for this "virus" actually detect a virus, rather, genetic material believed to be associated with a "virus." That genetic material could have come from anywhere. My God, folks, stop being snookered, hoodwinked and bamboozled by this hoax.

All planned...
So sad

Send us a link Rog, give me some proof this whole Covid-19 thing is a hoax or you are the one being snookered, hoodwinked and bamboozled. Let me ask you one thing, how can more than 200 countries and more than 400,000 bereaved families be involved in a hoax without at least 1 whistleblower coming forward. It is people like YOU Rog who are delivering the hoax and shame on you for doing so.

Gary, stay calm. I lean with suspicion as these others are also, BECAUSE there are many whistleblowers! Majority are doctors too! We even have TWO countries now that say otherwise regarding this planned demic, Italy and German health officials via medical experts!!!

You guys who deny every single abnormal crisis that comes our way every single damn day since 911, you always say where are the whistleblowers, why isn't someone coming forward etc etc and they are there Gary. They are in the news getting defunded, deleted, fired, jailed, and some even end up in coffins. Try not to judge and consider the information that contradicts the official narratives is all I am saying. You can not walk in the light if you have not opened your mind. God Bless.

Gary, if you go watch the short documentary called "Plandemic" you will see the whistleblower who was shut down for five years and ostracized, how she wasn't murdered is beyond me as most wind up dead. Stop looking for those that support the virus and start researching those who oppose the virus and why.