What happened to empathy? Horrific torture being used to cull billions of animals as Covid-19 intensifies: The cruellest, cheapest of ways which include mass slow suffocation, buried alive, grinding or gassing and burning alive 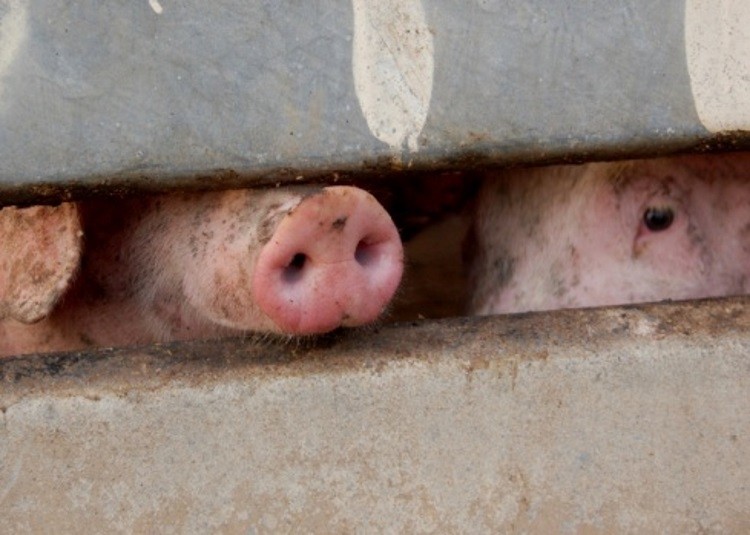 The Coronavirus outbreak has thrown a wrench into the world economy bringing the world's richest countries to their knees and dragging down global growth with it which means thousands of farms are going bust. Around the world, millions upon millions of farm animals are being culled as the worlds food supply chain chokes. Before the coronavirus arrived, the abuse and killing of cattle, pigs, sheep and birds were happening each second of every minute of every day of every year. As the coronavirus continues to tighten its grip around the world the mass culling of animals is beginning to explode in the cruellest, cheapest of ways which include mass slow suffocation, buried alive, grinding or gassing and burning alive.

According to an article in the Guardian, Covid-related slaughterhouse shutdowns in the US are leading to fears of meat shortages and price rises, while farmers are being forced to consider “depopulating” their animals. More than 20 slaughterhouses have been forced to close, although some have subsequently reopened. At least two million animals have already reportedly been culled on farms around the countries but that number is expected to rise considerably as the virus intensifies.

The article mentions disturbing 'approved methods' for slaughtering poultry include slow suffocation by covering them with foam, or by shutting off the ventilation into the barns. A nationwide advisory issued last Friday by the US Department of Agriculture and the Animal and Plant Health Inspection Service said state veterinarians and government officials would be ready to assist with culls, or “depopulation”, if alternatives could not be found. The Guardian claimed that chickens are most at risk, followed by piglets. “Chickens are bred for speedy growth and are meant to be slaughtered at between 42 and 47 days. After that, they die.” Political leaders in Iowa – the biggest pig producing state in the US - have warned that producers could be forced to kill 700,000 pigs a week due to meat plant slowdowns or closures.

In response to reports that nearly 2 million chickens have already been killed, trade body Delmarva Poultry Industry (DPI) told local media that methods used to “depopulate” flocks are accepted by the American Veterinary Medical Association (AVMA). In a letter this month to leading poultry companies, Mercy for Animals called AVMA culling methods – which include water-based foam generators, whole-house gassing and ventilation shutdown – inhumane. Foaming means covering hens with a layer of foam that blocks their airways, gradually suffocating them over several minutes. Ventilation shutdown, meanwhile, although described by the AVMA as “not preferred”, is one of the cruellest, but cheapest options said, Garcés. “Shutting down broiler chicken house ventilation systems means animals die of organ failure due to overheating, as temperatures quickly rise.” You can read the Guardian report here 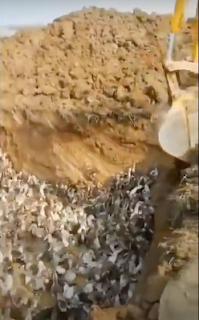 Left, thousands of geese and chickens buried alive in China during the early days of the coronavirus, the video is posted below, start the video at 5:23.

Since August 2018, when China notified the World Organisation for Animal Health that ASF (swine fever) was in the country, the disease has spread with extraordinary speed. Some 40% of Chinese pigs – hundreds of millions of animals – have now been killed or culled, spare a thought for the millions culled they were most probably buried alive in mass graves throughout the country.

In the first two weeks of 2020, 250,000 thousand chicken and turkeys were culled in Czechoslovakia, Poland and Hungary, I can't imagine what horrors met the birds as they were killed.

A top German court ruled in January 2019 that it is still lawful for poultry and egg producers to kill unwanted male chicks. The ruling, by Germany's Federal Administrative Court on Thursday, backs companies on a temporary basis until an alternative can be found. Mass-culling of male chicks is common practice in industrialised farming around the world. After being sexed, billions of the baby birds are killed shortly after birth - usually by grinding or gassing. Officials say this means about 45 million male chicks die every year in Germany alone. BBC

The mass-killing of male chicks is common practice in food production around the world. For the billions of hens used in egg and poultry farming every year, a similar number of male chicks are killed shortly after birth.

A video of hundreds of pigs being burned alive was filmed in China in December 2018. The video is so horrendous I am not going to post it here but you can see it here. Helpless pigs are thrown alive into a mass grave. They scream desperately even before they are burned alive, trying to survive as their fellow pigs are dumped on top of them. The excuse for why pigs are burned alive Burning and burying pigs alive is standard practice for killing pigs whenever there is a fear of virus infection in China. Such infections are common in crowded and filthy animal factories around the world. In this specific case, the pigs carried the African swine fever virus (ASFV), so the farm burned them alive prior to burying them. Killing pigs is not unique to China Sadly, the abuse and killing of pigs happen each second of every minute, not only in China but in most countries around the world.

considering that 'the coronavirus' is about as deadly as the flu according to many MDs and epidemiologists; this just shows clarifies for me the agenda.

Gates has his financial interests in both the 'seed bank', Monsanto, the GE meat industry (e.g. the toxic, glyphosate, GE Impossible Burger) and just invested more to collabirate with Tyson to get more GE meats onto the market. This way, Gates et al have another way to make money (and to depopulate useless livestock/humans included).

As vegan, I would be glad if people would stop abusing the livestock they consume. However, substituting with GE, toxic meat alternatives just weakens the human body and soul even more than the current exposure to toxins.

BTW: WHile US farmers are forced to cull their animals, beef from Africa just arrived on the shores.

Yes, I agree. Can't watch the video or read much more about this. I know it is happening but the lack of compassion is beyond imagination. "A righteous man cares for the needs of his animals, but the kindest acts of the wicked are cruel." Proverbs 12:10. Lord, please return soon.