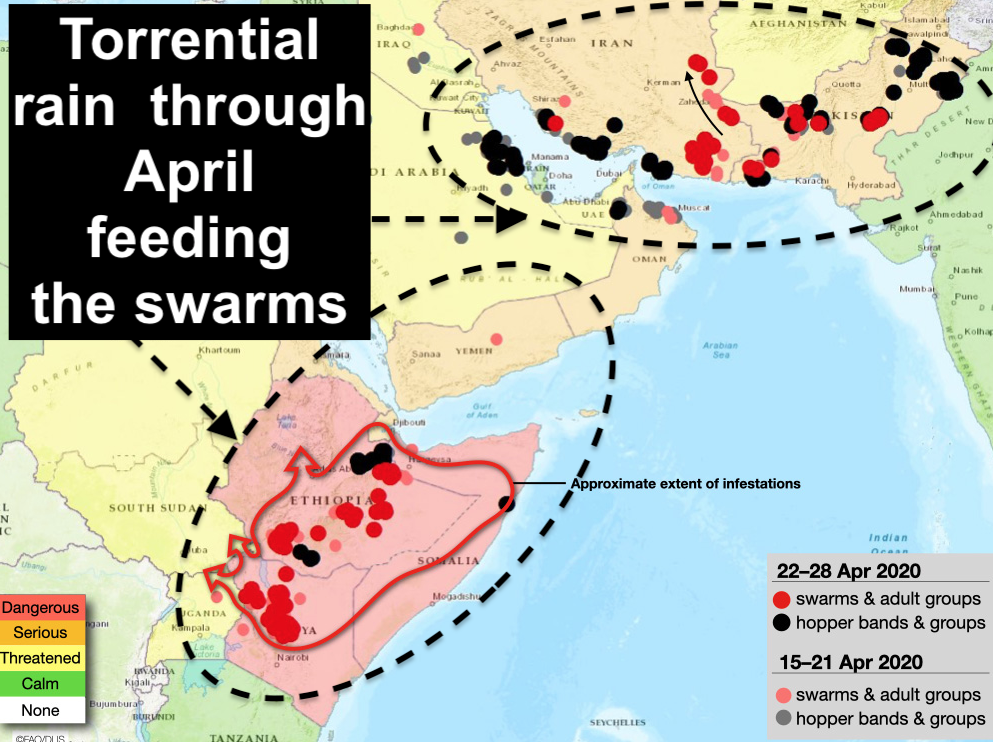 April has seen torrential rain from East Africa to Pakistan which is feeding the biggest locust plague the world has ever seen while Covid-19 is silently expanding in the poorest countries of the world. Map FAO

First came the floods. The waters swamped crop fields and created a breeding ground for swarms of desert locusts stretching from East Africa, the Arabian Peninsula and Southwest Asia.

A three-pronged attack is overwhelming the worlds most vulnerable countries affecting hundreds of millions of the most food-insecure people on the planet. April has seen torrential rain from East Africa to Pakistan which is feeding the biggest locust plague the world has ever seen while Covid-19 is silently expanding in the poorest countries of the world.

In countries whose medical systems are under-resourced, the health crisis could be compounded by a hunger crisis and lost livelihoods, according to the FAO.

The ongoing “long rains” in Kenya continue to cause flooding in western and eastern counties. Kenya Red Cross says as many as 30,0000 people have been displaced since March. Meanwhile, President Uhuru Kenyatta confirmed on 26 April that 29 people died in the massive mudslides and flooding in the border areas of Elgeyo Marakwet and West Pokot counties. The rains are helping the second generation of breeding which is about to start in Kenya, Spring breeding will cause a further increase in locust infestations in East Africa, eastern Yemen and southern Iran in the coming months.

Deadly flash flooding has struck in eastern Ethiopia killing at least 4 people, with flooding also reported in southern areas. Flash flooding has affected parts of neighbouring Somalia over the last few days. Authorities warn of a high risk of flooding along the Shabelle and Juba rivers in the coming days.

EAST AFRICA The current situation in East Africa remains extremely alarming as more swarms form and mature in northern and central Kenya, southern Ethiopia. This represents an unprecedented threat to food security and livelihoods because it coincides with the early beginning of the long rains and the current growing season. A new generation of breeding is underway in Kenya where more eggs will hatch and form hopper bands during May, followed by new swarms in late June and July, which coincides with the start of the harvest.

NE AFRICA & ARABIAN PENINSULA Breeding continues in several countries where hopper bands are forming that could lead to new swarms.

● YEMEN. Increasing reports of mature swarms copulating in the interior where floods occurred this week. ● SAUDI ARABIA. Control continues against mid-instar hopper bands near the Persian Gulf (Nairyah to Al Hofuf) and in the interior (Hail).

● SUDAN. The calm situation, only a few scattered adults on coast and interior.

SOUTHWEST ASIA Breeding continues in the spring breeding areas where the situation remains worrying in Iran.