Mystery disease killing thousands of blue tits in Germany with symptoms of the diseased birds including breathing problems, (pneumonia) no longer taking food 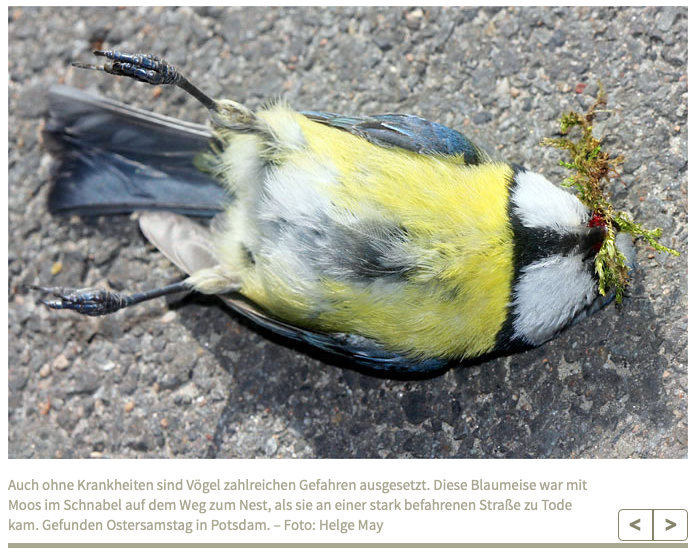 Thousands of blue tits have been found sick or dead in Germany, prompting an investigation by conservation groups and scientists. The tiny blue tit is a common bird found across Europe and the UK.

The blue tit is found across Europe and is one of the most common visitors to UK gardens. They eat insects, caterpillars, seeds and nuts and can be spotted all year round in the UK. According to NABU, (Nature and Biodiversity Conservation Union) symptoms of the diseased birds include breathing problems, (pneumonia) no longer taking food and making no attempt to escape when approached by people.

Blue tit death from bacterial infection Report sick or dead blue tits to us Since March, blue tits have been reported in many gardens, which appear sick and die quickly. The bacterium Suttonella ornithocola is responsible. In spring 2020, a remarkable number of blue tits are observed in Germany, which appears sick and dies shortly thereafter. Laboratory tests confirm that the bacterium Suttonella ornithocola is responsible, which causes pneumonia in titmice. However, the pathogen is harmless for humans and pets.

The first cases became known around March 11 in the Rheinhessen area of Rhineland-Palatinate and the adjacent regions on the Middle Rhine in Hesse, later followed by cases in Thuringia. In order to record and assess the spread of the disease and its effects on birds, NABU is asking for the reporting of sick or dead blue tits and the sending in of samples for examination.

Apparently blue tits, in some cases also great tits or other small songbirds, are apparently affected by the disease.   The diseased birds are mostly observed in the vicinity of feeding points in gardens and stand out because they no longer react to their environment. It was observed that blue tits that died shortly afterwards sat apathetically and fluffed up on the floor and made no attempt to escape when approaching people. Other symptoms of the disease are that the birds appear as if they have breathing problems, parts of the head plumage have failed, the eyes appear stuck together. They no longer take in food or apparently can no longer swallow. Some tits look like they are thirsty to quench. Better adjust feeding in affected gardens It is obvious that the disease is transmitted particularly where many birds meet, which is indicated by the usual location in the vicinity of bird feedings. For this reason, NABU generally advises that if more than one sick bird is observed feeding, this feeding and the provision of drinking troughs should be stopped immediately - as "social distancing" for birds, so to speak. So that affected bird populations can recover as quickly as possible, it is important to offer the surviving birds the best possible conditions for the upcoming breeding season. NADU. de