Locust populations continue to explode in size: Some areas expecting a 400x increase in the coming months representing an unprecedented threat to food security and livelihoods 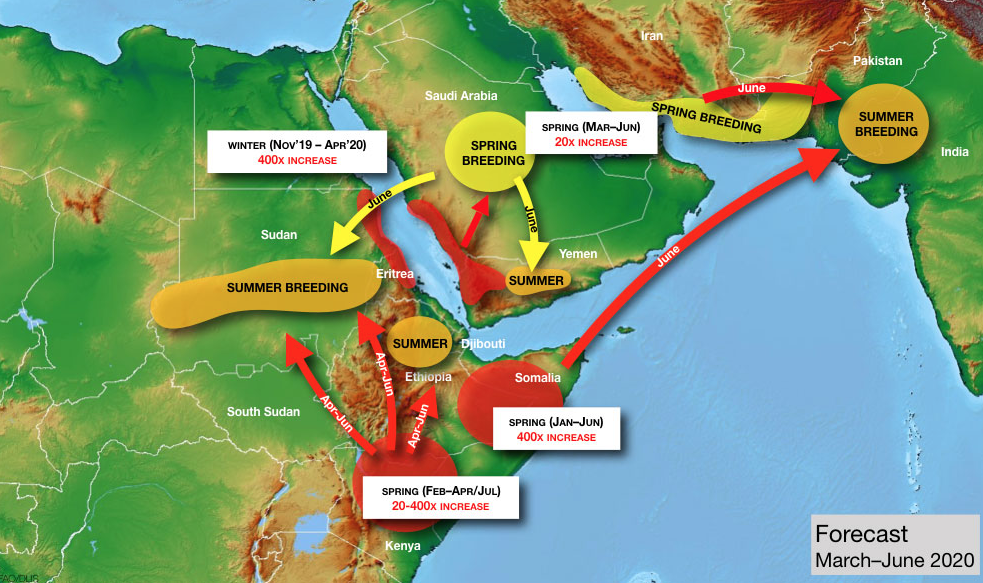 New swarms forming in Somalia and starting in Kenya.

The situation remains extremely alarming in the Horn of Africa, specifically Kenya, Ethiopia and Somalia where widespread breeding is in progress and new swarms are starting to form, representing an unprecedented threat to food security and livelihoods at the beginning of the upcoming cropping season.

EASTERN AFRICA Kenya. Widespread swarm breeding continues in northern and central counties where an increasing number of hopper bands are forming and, in the past few days, the new generation of immature swarms have started to form. This may be supplemented by new-generation immature swarms arriving from Somalia. Further concentration is expected in Marsabit and Turkana. Aerial and ground control operations continue.

Ethiopia. Swarms continue to mature and breed over a widespread area of Oromiya and SNNPR regions, including the Rift Valley. Cross-border movements continued to be reported from adjacent areas of Somalia and Kenya. Somalia. In the northwest, late instar hopper bands and immature adult groups are forming between Berbera and Burao. In the northeast, new immature swarms are forming near Garowe. Some swarms may be moving south towards NE Kenya. South Sudan. The mature swarm was seen on 23 February near Laboni and the Uganda border dispersed into many small swarms.

OTHER HOTSPOTS Sudan. Scattered adults are maturing on the central coast of the Red Sea. No locusts reported elsewhere.

Eritrea. Breeding continued on the central and northern Red Sea coast where groups of hoppers and immature adults formed. A mature swarm appeared on the coast near Massawa and laid eggs.

Saudi Arabia. Ground control operations against hopper bands on the Red Sea coast near Qunfidah finished on 26 February but continued against immature groups in the interior between Wadi Dawasir and the Persian Gulf.

Yemen. Another generation of breeding is in progress on the Red Sea coast where hatching and early instar hopper bands continue to form. An immature swarm was seen in Sana'a on 29 February. New breeding was seen on the southern coast near Aden where early and late instar hopper bands were present, the latter forming immature adult groups. Control could not be carried out.

Oman. Breeding continues on the north and east coasts where hopper groups and bands have formed. Swarms were reported recently on the north coast.

Iraq. Swarms were reportedly flying in the southeast between Basrah and Nasiriyah.

Iran. 22 immature swarms spread out along the southwest coast between Bushehr and Bander-e-Lengheh in Fars, Khozestan, Bushehr and Hormozgan provinces where they quickly matured within four days to lay eggs. Local breeding continued in the southeast. Control operations are in progress.

Pakistan. Mature adult groups and swarms were seen copulating in Okara district of Punjab and Dera Ismail Khan and Lucky Marwat districts of Khyber Pakhtunkhwa. Spring breeding is in progress in the interior of Baluchistan between Khuzdar and Dalbandin, and on the southwest coast near Turbat where adult groups are laying eggs and early instar hopper groups are already forming. New generation immature groups and swarms could start forming in Baluchistan by the end of March.