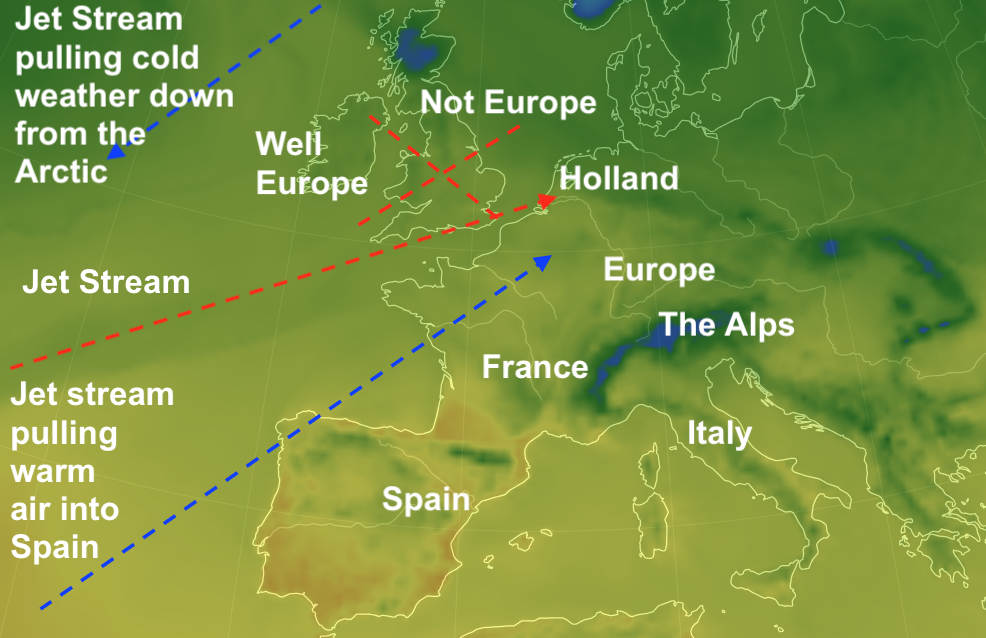 Earthwindmap showing incredibly warm weather in Europe and not Europe at the moment!

2020 has shown some remarkable events already, none more so than the crazy weather. Where I live in Holland, winter has been replaced with a sort of temperate grey, wet and windy end of Autumn type of weather with the temperature usually hovering near the 10 deg C, (50 deg F). I can't remember one frost this winter, and definitely no snow. The climate is definitely changing here, no two ways about it but I don't believe it's anything to do with Al Gores CO2 theory because of other lands furth south from here have had unusually cold and snowy weather. Spain Portugal and Greece have all suffered from colder and snowier winters than usual.

It's not all about warmth, I understand that. Last week the Westcoast of the US and Canada ad torrential amounts of rain and snow. Record-breaking amounts of rain hit Northern Australia last week. Northern India, Pakistan and Afghanistan have had record amounts of snowfall and cold stretching back to December 2019.

While you may not agree with the world scientific community, the fact of the matter is NOAA just announced 2019 was the second hottest year in recorded history and the preceding ten years were the warmest on record as well. In terms of cooling, the last time the Earth experienced a 30 day cycle of cooler than normal temperatures was December 1985.

I absolutely agree with you Sir

When it comes to turning precision features on parts, the result you need depends on getting a number of factors right. The fundamentals of them are accuracy and stability, but doing these things right can bring about a considerable improvement in the performance. turned parts manufacturer

When it comes to turning precision features on parts, the result you need depends on getting a number of factors right. The fundamentals of them are accuracy and stability, but doing these things right can bring about a considerable improvement in the performance. turned parts manufacturer