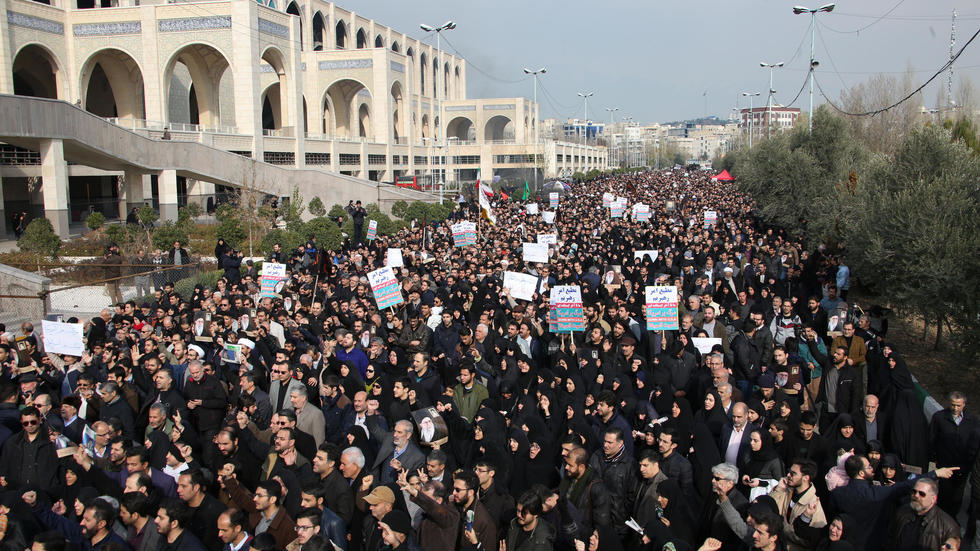 DOWNING Street was last night livid with Donald Trump for endangering British troops by assassinating Iranian military chief Qasem Soleimani without any warning. In a serious breach of protocol between key allies, the US president didn’t tell Boris Johnson about the Baghdad missile strike on the terror mastermind. The attack sparked immediate overnight concern for the safety of hundreds of British troops stationed in Iraq and fears they could be targeted for revenge. In a snub to the White House, the British Government refused to give any public support for the killing yesterday. As fears also rose for the precarious deal with Tehran to stop it building a nuclear arsenal, one angry senior British official even accused Mr Trump of behaving “like a mafia boss”. The Sun

"There will be dead Americans" as a result of Iran general being killed, ex-CIA deputy director says

The targeted killing of Qassem Soleimani, one of Iran's top military leaders, has escalated tensions between the U.S. and Iran, with Iran vowing revenge. CBS News senior national security contributor, and former acting and deputy CIA director Michael Morell told "CBS This Morning" the drone strike on Soleimani will lead to "dead civilian Americans." "Soleimani was an evil genius, he had a lot of American blood on his hands," Morell said. "The world is a better place without him. The problem is that comes at a very high cost. Number one, there will be dead Americans, dead civilian Americans, as a result of this. Possibly over the next few days in any place where Iran has its proxies, Iraq is the most likely place, but also Lebanon, Bahrain, other places in the Middle East." Morell said Iran would lose the battle if they responded with a military strike on U.S. forces in the region. He said he thinks Iran's proxies throughout the region will go after civilians, but that's not all. CBS

Dow Jones and S&P 500 stock indexes posted their biggest losses in a month after a US airstrike killed Iran’s Quds Force chief Qassem Soleimani, tempered only by the buoyant mood of defence and oil-related shares. Wall Street stocks went down at the news of the assassination of Soleimani, an influential general who led the Islamic Revolutionary Guard Corps (IRGC), Quds Force. His death in a Thursday night attack at Baghdad International Airport also claimed the lives of nine other people, including senior Iraqi militia officials. RT

While there was no shortage of triumphant voices coming from Washington DC on Friday after the targeted assassination of a senior Iranian general, that of John Bolton seemed especially cheerful. The former national security adviser in the Donald Trump administration took to Twitter to congratulate "all involved in eliminating Qassem Soleimani," the commander of Iran's elite Quds Force. RT

IRAN HAS HEZBOLLAH SLEEPER CELLS IN THE U.S. READY TO STRIKE

Ali Kourani previously tasked with conducting surveillance of JFK & Pearson airports. The threat posed by Iran-backed Hezbollah sleeper cells embedded in major American cities has once again come to the fore following the killing of Iran’s Quds Force General Qasem Soleimani. Following last night’s assassination of the Iranian military leader, authorities in both New York and Los Angeles announced that they were ramping up security in readiness for possible revenge attacks on U.S. soil. This is because Iran is known to have placed Hezbollah terrorist sleeper cells throughout not just Europe but the United States too. Info wars

A huge crowd in Iraq's capital Baghdad is taking part in a funeral procession for the Iranian military commander Qasem Soleimani, who was killed in a US airstrike on Thursday. Soleimani was the architect of Iran's Middle East operations. Iran has vowed to take "severe revenge" for his death. The gathering in Baghdad on Saturday marked the beginning of days of mourning for Soleimani. His body is to be returned to Iran for a funeral and burial in his home town. BBC

I think it best if let the USA handle their politics.... there was not a nore dangerous inhuman person exiting in the world than that Iranian General who death has and will slow down the spilling of Innocent blood. I am unsubscribing because if you are so blind-sided by the actions of Trump then your interpretation of world events is probably skewed also. Bye-Bye