The Portuguese Man O’ War, continues to wash ashore in unprecedented numbers along the beaches of Trinidad and Tobago: Jellyfish are fast becoming the “NEW KINGS OF THE OCEAN,” 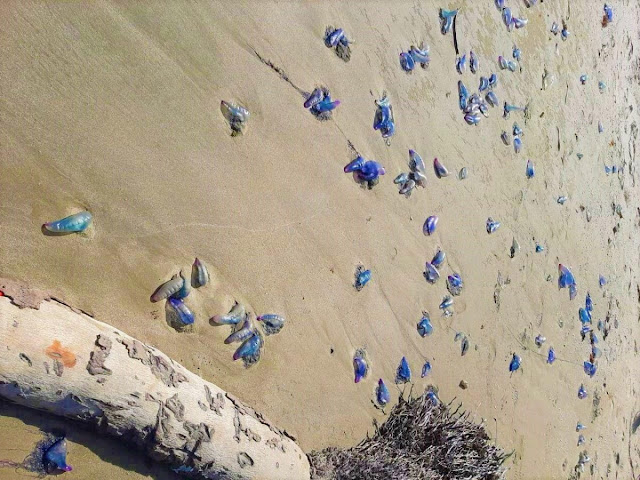 Picture, StadbroekNews
What comes out of the ocean will inevitably show the health of the ocean it came from.
Jellyfish are taking over, fast becoming the “NEW KINGS OF THE OCEAN,” The rapid growth over the last few decades of these creatures is a sign of the planet's deteriorating marine health Jellyfish are thriving because their predators are dead. Reports of Jellyfish invasions are commonplace worldwide these days.
The Portuguese Man O’ War, continues to wash ashore in unprecedented numbers along the beaches on Trinidad east and north coasts. These organisms classified by the Institute of Marine Affairs as a dangerous marine creature, are known as a siphonophore.

“I do not recall seeing them in such large numbers at any one time. Since their only means of propulsion is by winds, currents and tides, their abundance at this time suggest that all conditions are appropriate for them to survive in the sea and coastal waters," said Doctor Judith Gobin, a clinical ecologist and Lecturer at the University of the West Indies St. Augustine. "This includes food availability, winds and currents or temperature.” While the man o’ war may appear attractive due to its colours and curious shape, she said that caution should be exercised during this time due to their venomous nature. “As most of us are aware, they possess long strands of tentacles." "They can be quite long, up to 100 feet. Stinging nematocysts are present in these tentacles."  "These are microscopic capsules with coiled, barbed tubes which can deliver venom capable of paralyzing and killing small fish and crustaceans on which it feeds," said Gobin. Stabroek News 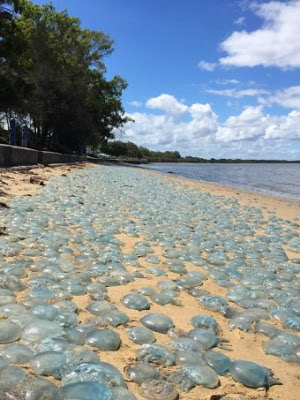 In February 2019, Deception Bay in Queensland, Australia was turned into "bubble wrap," when millions of Jellyfish washed up along the coast. "It happens every year but there's never been this many, this year it's heaps," Local Charlotte Lawson said. "There was only a metre of sand between the jellyfish and the concrete," she said, estimating the jellyfish carpet was between four to six metres wide. There was so many of them, it looked pretty cool - it looked like bubble wrap across the beach." Lawson said the jellyfish plague normally lasts about a week, but this year's lot could last a bit longer. "As the tide comes in they disappear but when the tide goes back out they're there," she said. "They're already starting to smell." Full story