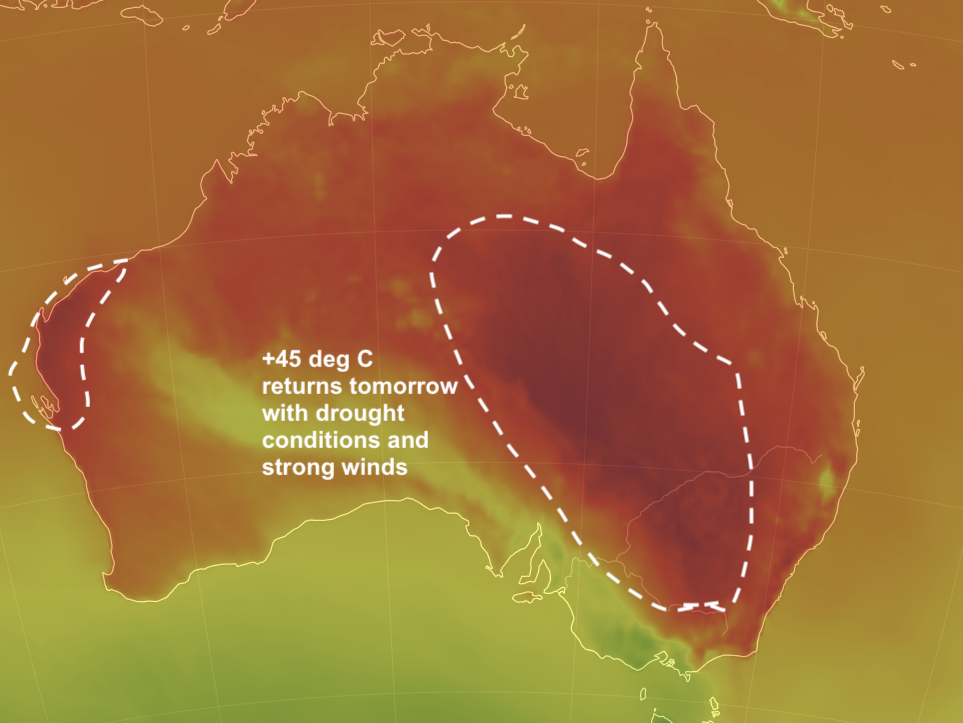 
The Bureau of Meteorology has released its 2019 Annual Climate Statement, showing 2019 was both the warmest and driest year on record for Australia.
Australia's average mean temperature in 2019 was 1.52 °C above average, making it the warmest on record since consistent national temperature records began in 1910 and surpassing the previous record in 2013 of 1.33 °C above average.
Meanwhile, the national average rainfall total in 2019 was 277 mm, the lowest since consistent national records began in 1900. The previous record low was 314 mm set during the Federation drought in 1902.
Bureau of Meteorology head of climate monitoring Dr Karl Braganza said the record warm and dry year was one of the key factors influencing recent and current fire conditions in large parts of the country.
"2019 was consistently warm, but it was bookended by periods of extreme heat," Dr Braganza said.
"January last year was the warmest month Australia has ever recorded, while just a few weeks ago in December, we saw the Australia-wide record hottest daily average maximum temperature broken multiple days in a row.
"At the same time, rainfall deficiencies across large parts of eastern Australia have continued to increase, unfortunately exacerbating both drought conditions and the current bushfires."
"We also saw the influence of a rare Sudden Stratospheric Warming event high above the south pole, which acted to push our weather systems northward and compound the warmer and drier than average conditions over southern Queensland and New South Wales during spring, amplifying the fire weather.
"In January and February, we saw exceptional rainfall have a major impact on communities in northern Queensland, particularly around Townsville.
"The floodwaters were so significant they eventually made their way to South Australia, where we saw one of the largest fillings of Kati Thanda – Lake Eyre in many years."
The bushfires are horrendous, but we can expect cyclones, floods and heatwaves too.

Public attention on the disastrous bushfire crisis in Australia will rightly continue for weeks to come. But as we direct resources to cope and recovery, we should not forget other weather and climate challenges looming this summer. The peak time for heatwaves in southern Australia has not yet arrived. Many parts of Australia can expect heavy rains and flooding. And northern Australia's cyclone season is just gearing up. ABC

Residents are warning NSW government logging operations on the South Coast have left behind large piles of combustible debris threatening to ignite "like a giant bonfire" and devastate coastal towns near Batemans Bay. The Herald has seen photographs of tree branches, logs, bark and wilted leaves piled metres high in the Benandarah State Forest, immediately north-west of Batemans Bay. Furious residents want an explanation as to why the debris - also known as "slash" - was left behind after recent logging by the state-owned Forestry Corporation of NSW, which produces 14 per cent of the state’s timber. Sydney Morning Herald

'Disturbing and dramatic': Ecosystems may never recover from bushfires.

Some ecosystems across Australia's eastern seaboard will never recover from the damage wrought by this season's bushfires and several animal and plant species are now feared critically endangered or extinct. Parks Victoria chief conservation scientist Mark Norman said the glossy black cockatoo was one species that could now face extinction. "When you map their distribution up the east coast, from healthy populations in southern Australia to Queensland, almost every pocket of forest that they live in has been burnt," he said. Sydney Morning Herald

Authorities have issued new warnings and evacuation notices across southeast Australia, as a return of hot weather fans huge bushfires threatening several towns and communities. A disaster level notice in large parts of Victoria state, already in place for the past week, has been extended by 48 hours and people in danger zones advised to leave if it was safe to do so. 27 people have died, more than 2,000 properties have been destroyed and thousands of people have had to evacuate repeatedly as the monster fires scorched through more than 10 million hectares of land. Many towns are without power and telecommunications and some are running low on drinking water supplies. Ecologists at the University of Sydney have doubled their estimate of the number of animals killed or injured in the fires to one billion. The fires have already emitted 400 megatonnes of carbon dioxide into the atmosphere and produced harmful pollutants, the EU's Copernicus monitoring programme said. The smoke has drifted across the Pacific, affecting cities in South America, and may have reached the Antarctic, the UN World Meteorological Organization said.
xx

‘Soul destroying’: Australia’s bush fires are about to ‘take off again’, scientists warn

Don’t be fooled by the brief lull – authorities warn more ‘extreme fire weather’ is on its way, fuelled by drought, high temperatures and winds. Video taken on board a Royal Australian Air Force plane on January 4, 2020, shows the view shrouded by a glowing orange haze from Australia’s raging bush fires. The aircraft was on a mission to rescue people stranded by the months-long wildfires.