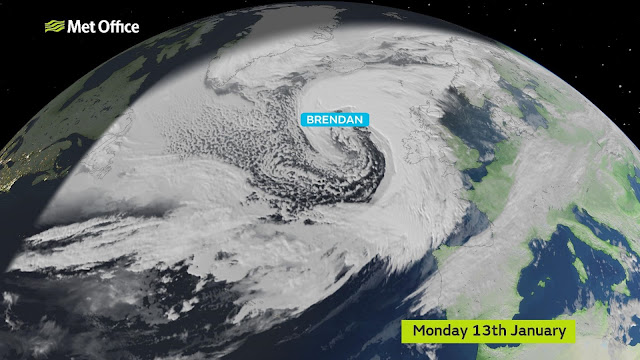 As expected, a powerful bomb cyclone Brendan continues its explosive development and rapid intensification while moving towards the British and Irish Isles – Brendan is becoming a *monster*! Central pressure is already below 945 mbar, continues deepening. Gale force winds are being pushed towards western Ireland, Northern Ireland and Scotland, while conditions are expected to significantly worsen through the next hours as the cyclone moves closer.

The Met Office has issued a yellow wind warning for Monday afternoon and evening, this covering Northern Ireland and much of the western half of the UK, as well as northeast Scotland. Met Office Chief Meteorologist, Frank Saunders, said: “The UK and Ireland will turn increasingly windy on Monday, as Storm Brendan approaches, and there'll also be some heavy rain. It’s going to be particularly windy across the western half of the UK, with gusts reaching 60-70 mph along Irish Sea coastlines, the west of Scotland and perhaps some English Channel coasts - maybe even 80 mph in a few exposed places.

This is likely to cause some disruption to sea, road and air travel. “As Storm Brendan moves eastwards, strong winds will also develop across eastern parts of the UK, particularly northeast Scotland where there is also a wind warning in place.” Met Office
xx xx