Aussie Bushfire Update: Sydney's drinking water in danger: We're not going to get these fires put out! Baby bats being left for dead in thousands: Expecting highest temp ever this week 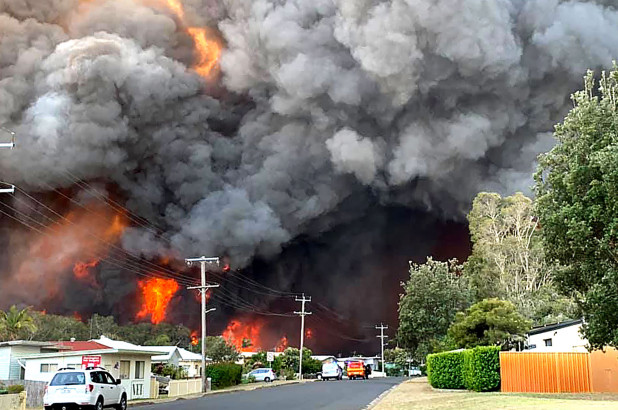 Credit nypost.com "People should be under no illusions, we're not going to get these fires put out."

"People should be under no illusions, we're not going to get these fires put out." "We're going to do as much as we can to protected as many homes as we can, but I think for those residents in those areas and firefighters, it's going to be a really tough week." Captain Peter Duff from the RFS Terrey Hills Brigade captured footage of a terrifying wall of flames blazing at Mt Tomah. In the video, posted to Facebook, a firefighter says they are tackling "spot fires galore" and flames 60 to 70 metres high. ABC

Mass baby bat deaths threatening the future of forests as effects of drought and bushfires mount.

Baby bats are being left for dead by their mothers in their thousands on the New South Wales coast in an 'abandonment event' as drought and bushfire remove crucial vegetation for the keystone species.  Key points: Baby bats are being abandoned along the NSW coast by their mothers About 1,700 bat deaths have been recorded in the Shoalhaven alone since November 20. It is believed to be caused by a reduction in habitat and feed due to drought and bushfires. ABC

Australia is bracing for its highest recorded temperature ever which is currently 50.7C, (123 deg F)

Australia's nightmare summer is about to get worse, after the country's worst November in living memory suffering record-breaking wildfires, a crippling drought, toxic-smog and a long heatwave with temperatures above 40 deg C, (104 deg F) in many parts another record is about to be broken. The Aussies are bracing themselves from a hot air mass which will fuel another devasting heatwave and it is expected to top Australia's current record high temperature of 50.7C, (123 deg F) at Oodnadatta in SA, that record was set on January 2, 1960, which will fuel the deadly fires. Full story

Sydney's drinking water in danger from the Bushfires

Sydney’s drinking water supply is at risk of the same “worst-case scenario” facing some New South Wales regional communities, where large amounts of bushfire ash have been swept into dams by heavy rainfall, a water expert has warned. Stuart Khan, a water quality security expert and environmental engineer from the University of NSW, said recent bushfires had left large deposits of ash in the Warragamba Dam catchment, which supplies 80% of the city’s drinking water.
Khan said some regional communities, such as Tenterfield in the northern New England region of NSW, had already had their drinking water supply polluted by ash. When ash – which contains large amounts of organic carbon – enters the water supply it can take oxygen from the water and change the water chemistry. Khan said fish kills were possible, as was blue-green algae. Guardian

The wildfires which started nearly a month and a half ago are only increasing in intensity with no ending in sight.