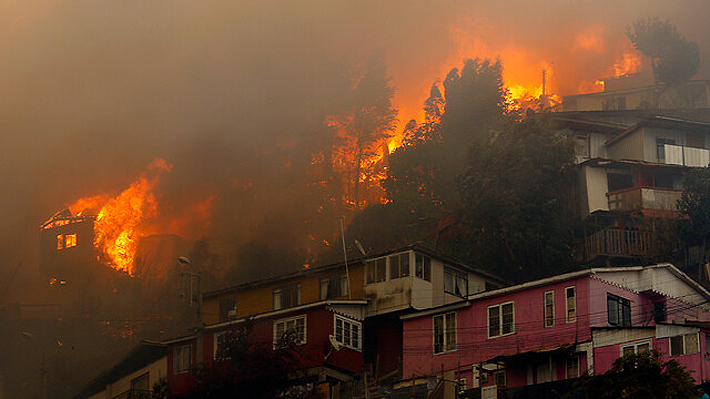 At least 120 houses have been destroyed by fast-moving forest fires in the Chilean city of Valparaíso, prompting a mass evacuation, officials say. The fires affected the Rocuant and San Roque hills and spread to two poor residential areas. All the city's firefighters have been deployed. Mayor Jorge Sharp said the fires had been started "intentionally". There have been no reports of any casualties. Strong winds and high temperatures were exacerbating the situation. Power was cut to about 90,000 customers in the area as a precautionary measure. Two schools were turned into shelters for the affected residents, who were forced to flee in the middle of Christmas Eve celebrations.
Valparaíso, in central Chile, is one of the country's largest cities and a major port on the Pacific. It is also a popular tourist destination in South America. BBC

"At the moment there are all the services deployed to control this fire, in coordination with the municipality and also with the government and the regional government," added Chile's Secretary of State, who also assured that the Ministries of Housing and Social Development will support the affected families. Meanwhile, the national director of Onemi, Ricardo Toro, was responsible for explaining the details of the destruction that has caused the fire. "They are reported preliminary, and this is information that is in development, more than 100 homes with damage, still to be evaluated," he said. This figure will be updated tomorrow during the day. Also, Toro reported that "there are 90,000 customers without electricity service" due to the cut scheduled by Chilquinta for security reasons, while in terms of drinking water, the authority said that the Esval company applied a series of "solidarity cuts" in some sectors of the region, in order to "support the work of Firefighters". EMOL

In February this year, Chile declared a 'state of catastrophe' in three regions ravaged by forest fires that killed two people and razed 10,000 hectares of land. High temperatures, strong winds and low humidity were blamed for sparking and spreading the fires. The Big Wobble