Storm Ezekiel with the strength of a hurricane, Winter Storm Dorothy and the East Coast Cyclone wallop most of the U.S. leaving many not feeling very thankful 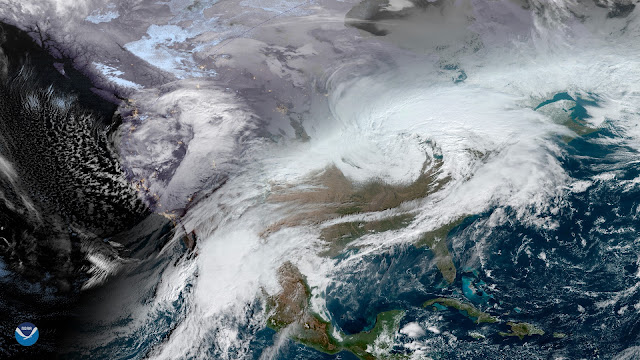 Records are being smashed as a series of winter storms are making their way across the country and are expected to make travel conditions challenging, if not impossible, this Thanksgiving weekend.

In the West, a historically powerful and rare mid-latitude cyclone that developed over the Pacific on Tuesday, Nov. 26 has made landfall over southern Oregon and Northern California. This large low-pressure system developed rapidly, dropping more than 24 millibars, a measure of atmospheric pressure, over 24 hours—the lower the pressure, the stronger the storm. This rapid strengthening, known as bombogenesis, is bringing strong winds, with gusts up to 100-mph along the coast, and multiple feet of snow to the mountains. With central pressure near 970 millibars, the storm has set a record for the month of November and is gradually weakening as it moves inland.
As storm Ezekiel moved in, a record low pressure was recorded in Crescent City. The weather service said it appears to be the lowest ever recorded in California, based on unofficial records. The storm met the criteria for a bomb cyclone as it moved toward the coasts of Northern California and southern Oregon, meaning its pressure dropped rapidly. The Weather Channel has named the system Winter Storm Ezekiel.

Hundreds of drivers were stranded on interstates in California and Oregon as blizzard-like conditions caused white-outs and piled-up snow. More than 360,000 power outages were reported across California, Michigan, Indiana and Ohio as part of a "major outage event". The "bomb cyclone" brought 100 mph winds and up to a foot of snow in some areas when it landed on 26 November. The massive weather system has weakened, though it's expected to continue pounding parts of the Sierra Nevada and deliver more snow across Colorado, Nevada and Utah as it lingers in the central US. Heavy rains, flash floods and coastal flooding also are likely in southern California through Thanksgiving, moving into the Southwest by Friday morning. The Independent

Meanwhile, east of that storm, a "kitchen sink" system that brought more snow and rain across the central US earlier this week has settled near the Great Lakes. Further south, whipping winds brought tornadoes to Louisiana and Mississippi, where nearly a dozen homes were damaged outside Jackson.The Independent