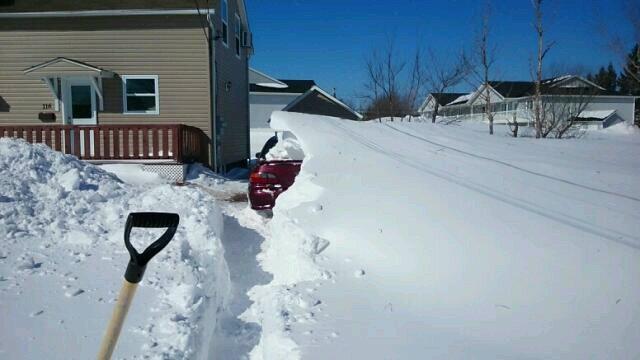 Mike and Paula Williams, the owners of EagleSong Family Peony Farm near Anchorage Alaska, have lived in their patch of land west of the Susitna River for 26 years, but they'd never experienced a snowfall quite like this. 46 inches of snow fell in the 36 hours they recorded - a half of a foot more than their previous unofficial record set back in 1994. The snowfall was so dramatic, they couldn't record it all with one yardstick. KTUU

Utah, “Friends and neighbours came together on Thursday for more than a turkey dinner, but to help each other dig out after a record-breaking early-season snowstorm,” reports cachevalleydaily.com. 13 inches of global warming goodness fell at KVNU’s weather reporting station by Thursday afternoon — the station’s previous record snow total for November 28 was the 4.5 inches that accumulated back in 1975. The Utah City of St. George ended a record-long dry streak with its record-wettest November day. The southwestern Utah city recorded no measurable rainfall (at least 0.01 inches) from June 18 through Nov. 19, a streak of 155 consecutive dry days. This set a new record-long dry streak, smashing the previous record of 121 days, according to the National Weather Service. But everything changed Wednesday when St. George suffered a case of weather whiplash. The city received 1.29 inches of rain Wednesday morning, a 24-hour precipitation record for any day of November. Weather records in St. George dating back to 1893. Weather News

New Mexico’s largest city has set a record for snowfall on Thanksgiving Day. The National Weather Service says 3.1 inches (7.8 centimetres) were recorded at the Albuquerque airport Thursday. Looking back over 60 years of data, forecasters say the previous snowiest Thanksgiving was only a half-inch (1.27 centimetres) in 2007 according to AP

Saturday and Sunday’s cool weather are expected to set temperature records for the Las Vegas Valley. Chelsea Kryston, a meteorologist with the National Weather Service, said Saturday’s high temperature is projected to be 48 degrees with a low of 33 degrees. That forecasted high temperature is just off the record low high of 47 degrees set in 2006. “It (the record) is within a degree right now of our forecast,” Kryston said. Sunday could be a record-setter, too. The record low high temperature is 51 degrees set in 2004. The projected high temperature on Sunday, meanwhile, is 51 degrees. “Sunday is a possible low high record,” Kryston said, adding the low for Sunday is 38 degrees. 0.35 inch of rain (9 millimetres) fell in Las Vegas through 8 a.m. Wednesday, breaking the old record for the date set in 1963.Las Vegas Review Journal.

On Tuesday, a historic blizzard with snowfalls up to 33 inches (83.82 centimetres) fell in Drake, Colorado, while the university towns of Boulder and Fort Collins got respectively 17.6 and 15.5 inches, both the second biggest November totals in history, according to The Weather Channel.

As of 4 p.m. on Thursday, Long Beach had received 2.17 inches of rain, breaking the previous record of 1.93 inches set in 1970, according to the National Weather Service.

In California, snowfall totals topped 4 feet at Big Bear; Lake Arrowhead had over 2 feet and Idyllwild over 1 foot.