Iceland authorities are monitoring Askja volcano 24/7 after a swarm of 1,000 earthquakes have been recorded at the caldera, in less than a week 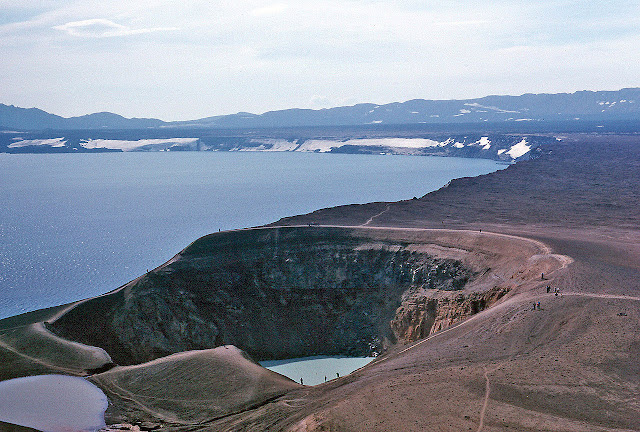 Another earthquake swarm has been reported, which began around the Askja volcano, in Iceland. Over 1,000 earthquakes have been recorded at the volcano, in less than a week. The earthquake swarm started the 7th of November just east of Askja volcano and is still ongoing. This morning at 7:30 an event of M3.1 occurred east of Askja. Around 1000 earthquakes have been recorded in the area since the swarm started. The largest earthquake was M3.4 and occurred on the 9th of November. No volcanic tremor has been detected in the area. The IMO is monitoring the activity 24/7.

According to Wikipedia, Askja is a caldera situated in a remote part of the central highlands of Iceland. The name Askja refers to a complex of nested calderas within the surrounding Dyngjufjöll mountains, which rise to 1,510 m (4,954 ft), askja meaning box or caldera in Icelandic.

Askja was virtually unknown until the tremendous eruption which started on March 29, 1875. Especially in the eastern fjords of Iceland, the ashfall was heavy enough to poison the land and kill livestock. Ash or tephra from this eruption was wind-blown to Norway, Sweden, Germany and Poland. The eruption triggered a substantial wave of emigration from Iceland. Another less well-known eruption, called Askja-S, occurred in the early Holocene, ca 11,000 years ago. Tephra from this eruption has been found in south-east Sweden, Northern Ireland and north Norway and recently as far south as Romania, which makes it one of the most far-travelled Icelandic tephras. The last eruption of Askja was in 1961.

A similar eruption would cause chaos for European Airlines, back in April 2010 tens of thousands of travellers were left stranded across Europe as a drifting ash cloud from the Eyjafjallajokull volcano spread rapidly south-east from Iceland and caused the biggest shutdown of the continent's airspace since 11 September 2001.